A one-hour conference call was recently held by representatives of ESPN, the World Series of Poker (WSOP) and POKER PROductions in addition to media members to discuss the upcoming November Nine festivities, including the controversial 15-minute delay of the broadcast which has received a great deal of criticism from some industry insiders. 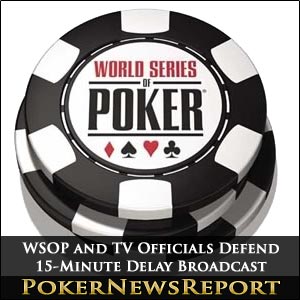 A one-hour conference call was recently held by representatives of ESPN,  the World Series of Poker (WSOP) and POKER PROductions in addition to media members to discuss the upcoming November Nine festivities, including the controversial 15-minute delay of the broadcast which has received a great deal of criticism from some industry insiders.

“We’re not concerned about the 15-minute delay,” said Dan Gati of POKER PROductions. “Hole cards will only be shown after a hand is complete. There’s no opportunity for a player to tank and try to get information. Shortening the delay from 30 minutes to 15 minutes makes the game more exciting while not impacting anything going on at the table.”

Lon McEachern, one of the ESPN commentators scheduled to provide analysis for the final table broadcast, was asked how the November Nine players feel about the 15-minute delay. McEachern said, “The only thing I’ve heard is from Matt Giannetti, who said in an interview, ‘As long as it’s a level playing field, it is what it is. It’s another level of the game we’re going to have to deal with.’ As long as it’s on equal footing, they seem fine with it.”

The final table will begin airing on Sunday with McEachern joined on the commentary by poker pro Antonio Esfandiari and Norman Chad scheduled to be in “different spots throughout” the broadcast. When the final table is reduced to three players, the action will resume on Tuesday with all three commentators in the broadcast booth “from start to finish,” Gati said.

Critics of the plan of the last several years to play the final table after a four-month wait have also lambasted the decision to suspend the proceedings again prior to a three-handed finale, concerned that the integrity of the game is taking a back seat to the greed of WSOP and ESPN producers who are seemingly milking the suspense of poker’s biggest stage in favor of the almighty dollar. Doug White, ESPN Senior Director of Programming and Acquisitions, explained the reasoning behind the move.

“It really comes down to the excitement factor as well as ensuring we would have more time on the air. We’re making a big commitment with the 15-minute delay and we wanted to make sure we’re able to give viewers and fans the best viewing experience possible,” White said.

During main event action in July, TV producers aired hole cards of players only if the hand saw a flop. In the November Nine broadcast, hole cards from each and every hand are scheduled to be shown, whether or not a flop is dealt. Some poker fans question the logic of showing mucked cards if no flop is dealt, claiming that looking at bad cards adds nothing to the excitement value of the game. Yet other fans will argue that it is a huge part of the game to see the type of hands that the pros decide to muck or play.

This year’s November Nine represent seven different countries, the most for a WSOP Main Event final table ever. ESPN plans to highlight the diverse makeup of the players with interesting information and graphics. “It’s one of the youngest final tables we’ve had,” Gati said. “You’re going to see rowdy crowds from each country.”

A number of special video segments are scheduled for airing during the near-live broadcast. “The plan is to run a bunch of flashbacks when hands come up that are similar to past hands,” Gati stated. “We’re also going to run some coverage of the at-home features. There are going to be player intros and teasers that have been pre-produced, but it’s really going to be a lot of poker.”

For those outside of the U.S., the November Nine broadcast can be seen on international ESPN networks, including the Caribbean, Africa, Latin America, Pacific Rim and Brazil outlets. Poker fans in the U.S. who are busy watching the NFL or not near a TV set can watch the final table action via online stream at ESPN3.com.

The initial plan for the November Nine festivities was to not show the action near-live. The change made by producers and WSOP officials may have ocurred because of ratings. Regarding ratings numbers leading to the November Nine, Gati confirmed, “They haven’t been as strong as they were last year. There could be several reasons for that, which we’re looking into. The presentation this year is uniquely and vastly different than what we’ve done in the past. Fans will gravitate toward the immediacy of what we’re presenting, so we’re looking for a good final rating.”

Some industry observers claim that airing the event near-live without showing hole cards during the actual hand in progress may alienate the more casual poker fans. Gati appealed to the intelligence of the viewers in stating, “There has been discussion in the poker community as to whether these shows appeal to the average viewer. I believe that the poker audience has evolved and they demand a little bit more analysis.”

“When we went into this season, we tried to address a lot of the questions and concerns in terms of the poker coverage like showing more hands and devoting less time to player profiles,” White said. “These are the things we tried to incorporate into the shows this year. We did move in a different direction in terms of presenting the WSOP Main Event on a live basis, but that’s something we heard from fans that they wanted to see.”