To coincide with the start of the 43rd World Series of Poker, the Hendon Mob have compiled an “All Time Money List” from the 42 previous series. 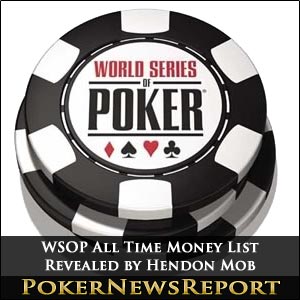 To coincide with the start of the 43rd World Series of Poker, the Hendon Mob have compiled an “All Time Money List” from the 42 previous series.

There are no surprises at the head of the list, with winners from the most recent WSOP Main Events filling the top 7 places, but further down the list there are one or two eyebrow-raisers.

Phil Ivey only makes 16th in the list – narrowly ahead of 2010 Players Champion Michael Mizrachi – while Daniel Negreanu occupies a lowly 34th position on the list, sandwiched between Chris Ferguson (31st) and Shaun Deeb (36th).

Other UK poker players to appear on the list include Dave Ulliot (99th), Jake Cody (208th), Sam Trickett (210th) and the Hendon Mob´s own Ram Vaswani (212th) – each of whom have more than $1 million in WSOP winnings to their name. Behind Annette Obrestad, the top women players make up a sorry bunch of also-rans, with Annie Duke in 193rd, Kathy Liebert in 232nd, Jennifer Harman in 233rd and the last female winner of any WSOP open event, Vanessa Selbst, back in 409th.

Details of all 23,054 players on the WSOP All Time Money List can be found on the Hendon Mob web site, with the Top 10 listed below:-

With Bwin having withdrawn their ludicrously short-priced market on the WSOP Main Event after one day, and no other online bookies being brave enough to price up the event, the only betting opportunities available on the World Series of Poker at present are available through the betting exchange Matchbook.

Matchbook are offering odds on whether top players such as Phil Ivey, Tom Dwan and Jason Mercier will win bracelets at this year´s series and, in addition to betting on their success, you can also lay odds that each of the listed players ends the series without collecting a piece of jewellery.