The World Series of Poker has acknowledged that an alarming trend is developing over the number of players competing in this year´s events. 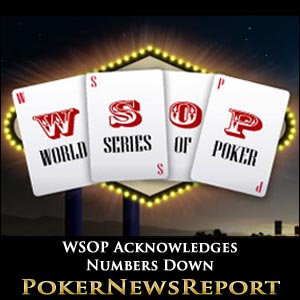 The World Series of Poker has acknowledged that an alarming trend is developing over the number of players competing in this year´s events.

Posted among the live updates for Event #5 – the $1,500 Pot Limit Hold´em – was a comparison of the numbers of players participating in tournaments this year compared to 2011.

Attendance Down For This Event

Last year, this event saw 765 runners. The end of level 4 was the deadline for players to late register, and the final number on the big clock is 639, a drop in attendance of 16%.

This is a trend that unfortunately has been seen in most of the events so far. Last year, 3,157 players played in the first $1,500 No-Limit Hold’em event, where as the opening event this year saw just 2101 entrants. It should be noted that the first $1,500 event last year was the 18th event rather than the first event, but it still is an alarming site. Attendance was also down in the $500 Casino Employees event, with a drop from 850 last year to just 732 this year.

It should also be noted that the $1,500 Seven Card Stud Hi-Low 8-or-Better actually saw a slight increase in entrants, with 622 this year as compared to 606 last year [2010 – 644]. Regardless, it will be interesting to see how the numbers look for the rest of the series.

A heavy weekend schedule approaches for the players at the WSOP and although the likes of Ivey, Negreanu and Hellmuth will bolster the numbers by entering every event, it is not looking very likely that any records will be broken.

Two events are scheduled to start on Thursday (today) which will prevent a lot of players competing in Friday´s popular Omaha Hi/Lo Event. Saturday sees the start of a five day re-entry event – which will overlap Sunday´s $5,000 buy-in 7 Card Stud tournament – and the only saving grace organisers may have is that two of the up-coming schedule are new events against which no comparisons can be made.

And if things were not bad enough – Annie Duke arrives on Friday!