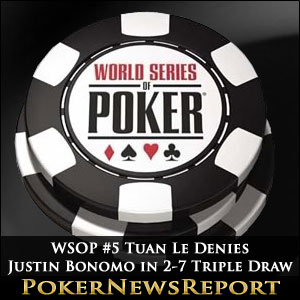 There was a tense conclusion to the 2-7 Triple Draw Lowball Event as Tuan Le struggled to shake off the attentions of Justin Bonomo – possibly the most successful poker player never to win a WSOP bracelet – after overcoming a field containing some of the most successful players in WSOP history.

Twelve players returned for the conclusion of the 2-7 Triple Draw Lowball Event after the starting field of 120 players had been whittled down to 52 on Day 1 of the event; but along the way we had lost the likes of Doyle Brunson, Barry Greenstein, Matt Ashton and four times WSOP bracelet winner Tom Schneider.

The action prior to the six-handed final table was all about Justin Bonomo. Bonomo moved into a commanding chip lead after busting out David Benyamine in twelfth place, and being responsible for the dual elimination of Jason Mercier in ninth place and Alexandre Luneau in eighth place.

The official final table was set when Eli Elezra sent Sergey Rybachenko to the rail in seventh place, by which time Justin Bonomo had chipped up to over 1.3 million chips – a lead equivalent to 37.5 big blinds over Elezra, with Tuan Le a further 15 big blinds back in third place.

Eli Elezra moved closer to Bonomo at the top of the leaderboard when crippling Phil Galfond with the near-perfect 7x 6x 5x 3x 2x, but Bonomo maintained his advantage when eliminating Galfond in sixth place. Elezra kept up the pressure on Bonomo when busting PokerStars Pro George Danzer in fifth place, and Nick Schulman moved into a clear third when hitting the perfect “wheel” (7x 5x 4x 3x 2x) to reduce Tuan Le to 310,000 chips.

Le returned the favour to double back up on Schulman, and then took three pots against Schulman in a row to cripple the 2012 WSOP Lowball Champion, before Justin Bonomo sent Schulman to the rail in fourth place. Bonomo and Le then reversed roles – Bonomo crippling Eli Elezra in a series of valuable hands before Tuan Le applied the knockout blow to send Elezra to the rail in third place.

However, Le was finding the right cards at the crucial stages, and moved back into the lead again – reducing Bonomo to less than a million chips for the first time since the six-handed final table had started.

A perfect “wheel” for Le enabled him to take a 2,765,000 -v- 835,000 chip advantage into the dinner break, and although Bonomo did manage to win an uncontested pot to inch back over the million chip threshold, the climax of WSOP Event #5 was soon to come to a conclusion.

After three rounds of betting, Justin Bonomo found himself all-in with 9x 8x 7x 5x 4x. Le tabled 9x 6x 4x 3x 2x for the better hand, and it was good for the WSOP bracelet and $355,324 first prize – Justin Bonomo finishing runner-up in a WSOP event for the third time.