Kyle Cartwright eliminated 6 of his final day opponents to claim victory in Event #4 of the 2014 World Series of Poker for the bracelet and $360,435 first prize 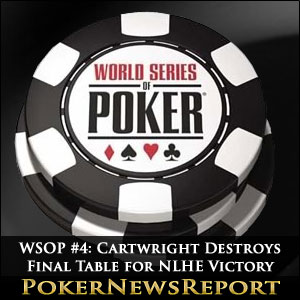 Kyle Cartwright eliminated 6 of his final day opponents to claim victory in Event #4 of the 2014 World Series of Poker for the bracelet and $360,435 first prize

Event #4 of the 2014 World Series of Poker saw 2,223 players pay the $1,000 buy-in for a 3-day NL Hold´em tournament. The money bubble burst late on Day 1, with Migual Proulx leading the 186 survivors into Day 2, from which twelve players returned for the concluding day of the event.

At the start of Day 3, Kyle Cartwright had a narrow chip advantage over Daniel Dizenzo, but he went into the nine-handed final table with almost twice the chips of his nearest opponent after busting Geoffrey Mooney in eleventh place A♣ K♣ > 10♥ 9♠ and Steve Chantabouasy in tenth place 9♥ 9♠ > K♥ Q♠.

With blinds of 10,000/20,000 (ante 2,000) when the final table got underway, several players had to adopt shove or fold strategies if they were to avoid being blinded out. For most it was an unsuccessful strategy to assume, but for the shortest-stacked player – Jason Paster – it worked tremendously well.

Within two orbits of the button Michael Sortino had been bust by Ylon Schwartz A♦ K♦ > 9♦ 9♣, and Ken Weinstein (8♦ 7♠) had been sent to the rail in eighth place after Jeremy Dresch (A♠ 9♠) had hit trip Aces. Jason Paster got the first of his double-ups against Ylon Schwartz J♣ J♦ > A♦ 5♣ before picking up more chips against Jeremy Dresch and Robert Kuhn when forcing them out of valuable pots.

Kyle Cartwright then got in on the action when his 9♦ 7♦ turned two pairs to eliminate Kuhn in seventh place, before increasing his tally of knockouts to four by sending Jeremy Dresch to the rail in sixth place Q♠ Q♥ > A♦ K♥ and increasing his chip stack to over 3 million chips.

Scwartz Emerges from the Pack but Paster Survives into Heads-Up

Ylon Schwartz temporarily edged the chip lead by default when Jason Paster spiked a two-outer to double-up against Kyle Cartwright A♦ 6♦ > A♥ 10♥, but soon it was Schwartz´s turn to be the victim of some Paster action, and he twice doubled-up Paster A♠ 8♣ > K♦ 9♠ and A♠ 2♠ > A♣ 10♣ to fall back to 2 million chips.

The climax of the 2014 WSOP Event #4 was over in nine hands – during which time Kyle Cartwright had used his chip advantage to good effect to extend his chip lead further with some aggressive post-flop action.

The final hand saw Jason Paster move all-in from the button with 4♣ 4♠ and Kyle Cartwright making the call with A♣ Q♦. The flop of 5♠ Q♥ 2♦ saw Kyle Cartwright take a strong lead in the hand, and his victory was sealed when the Q♣ was dealt on the River.

It had been a good run from Jason Paster to stay alive in the event after entering the final table with fewer than ten big blinds, but ultimately it was the name of Kyle Cartwright that will go down as winner of WSOP 2014 Event #4.