There were incredible scenes at the conclusion of WSOP Event #4 Day 1, as fifty-seven players bust in the last few hands of the night after the bubble burst. 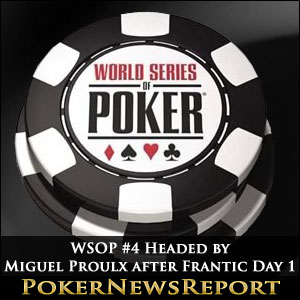 There were incredible scenes at the conclusion of WSOP Event #4 Day 1, as fifty-seven players bust in the last few hands of the night after the bubble burst.

The opening day of the $1,000 buy-in NL Hold´em WSOP 2014 Event #4 was a colossally busy day. 2,224 players squeezed into three rooms of the Rio All-Suites Hotel and Casino to compete in the first of the WSOP “donkaments” and, when the 243-player money bubble had burst, there was practically a stampede to the Cashier´s desk during the last few hands of the night.

Emerging as the chip leader once all the pandemonium had settled was Canadian poker player Miguel Proulx, who bagged and tagged 120,500 chips to have a narrow advantage over Andjelko Andrejevic (117,800 chips) and Dale Beaudoin (117,100 chips), with Brian Bauer (108,400 chips) leading the chasing pack.

Titans Join in the Fun

A fascinating seating combination saw former November Niner Phil Collins sat alongside Matt Stout, Chino Rheem and Gavin Smith, while another former November Niner – Jeremy Ausmus – had the misfortune to tangle with Greg Mueller and paid the price with an early exit. Other notable players who found themselves with time to kill earlier than they had hoped for included Jake Balsiger, Shannon Shorr and Sorel Mizzi.

Notable Chip Counts from Around the World

Scanning down the list of players who did survive the opening chaos of WSOP 2014 Event #4, Andy Lichtenberger doubled up late in the day 9♦ 9♠ > 8♣ 8♠ to carry forward 62,700 chips, Todd Terry finished the night with 31,100 chips after his pocket Queens cracked an opponent´s pocket Kings, and top female poker player Amanda Musumeci barely survived into Day 2 with a 15,200 chip stack.

Very few players from outside of North America managed to make it through to Day 2, although Niall Farrell is flying the flag for Ireland with 86,000 chips, Jose Arenstein from Brazil carries the hopes of South America with 23,800 chips and Jeffrey van den Broek registered the first Dutch cash of WSOP 2014 and aims to improve on the 20,200 chips he carries forward into Day 2.

Looking Ahead to Day 2 of WSOP Event #4

186 players will return to the Amazon Room later today, each assured of a $1,981 min-cash, but each hoping to ladder up the prize payouts and aim for tomorrow´s climax to the event which will see the winner collect the $360,435 first prize. A maximum of eleven levels will be played on Day 2, with blinds starting at 600/1,200 (ante 100). Those who should not have too many concerns during the early levels include: