Steve Billirakis leads the 6 survivors in the PLO Event #3 of the 2014 World Series of Poker in pursuit of his third WSOP bracelet and the $205,634 first prize. 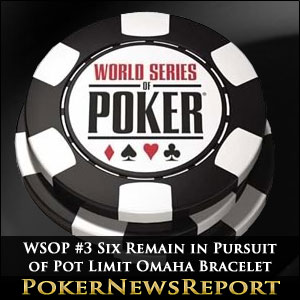 Steve Billirakis leads the 6 survivors in the PLO Event #3 of the 2014 World Series of Poker in pursuit of his third WSOP bracelet and the $205,634 first prize.

Day 2 of WSOP Event #3 saw a further ten levels of action reduce the 106 survivors from Day 1 to a final table of six. Everybody who had started the day´s play was already assured of a $1,928 min cash, but the six players in contention for the bracelet have now locked up $31,974.

At the top of the leaderboard, Steve Billirakis is aiming for his third WSOP bracelet after being the youngest player ever to win a WSOP event in 2007 at the age of 21 years and 11 days, and following up that success with victory in the 2011 Pot Limit Omaha Event.

Day 2 of the Pot Limit Omaha Event started with Loren Klein having a massive chip lead over the rest of the field. Klein´s chip stack went up and down like the proverbial yo-yo as players doubled up against him and then felt the force of his chip stack raining down upon them moments later.

Klein continued to race up and down the leaderboard throughout the day, and was eventually bust in eighth by Steve Billirakis when he moved all-in on a two spade flop with 4♣ 10♣ A♠ Q♠, but failed to find the fifth spade to improve past Billirakis´ A♥ K♥ K♠ 9♠.

New Contenders Emerge Throughout the Day

Steve Billirakis might have finished the day as chip leader, but throughout the day several bracelet contenders found their names at the top of the leaderboard. Joe Monro held a brief chip advantage until Matt Ryan turned a straight to best his flopped set of Queens, and Greg Merson also topped the chip counts for a short time after eliminating Mikal Blomlie A♣ A♦ Q♣ 9♠ > A♠ K♦ J♣ 9♦.

Robert Paddock emerged as the new chip leader – and the first player to breach 500,000 chips – when busting Jason Somerville and Yves Kupfermunz in a three-way all-in, and then following it up with the elimination of Andrew Patterson J♠ 10♦ 9♠ 8♦ > A♣ Q♥ 9♣ 7♣; but it was Brandon Shack-Harris who took the chip lead as the final nine players congregated around one table.

Shack-Harris had risen to the top of the chip counts with the elimination of Greg Merson in fourteenth place A♥ 10♠ 6♥ 5♣ > K♦ K♥ 8♥ 2♦, and John O´Shea in twelfth place J♠ J♣ K♥ 7♥ > A♥ Q♥ J♦ 5♥; and he looked like dominating the final table after busting both Nick Guangenti in ninth place and Patrick Arena in seventh place, until Steve Billirakis rivered a backdoor flush in one of the final hands of the night to move back up to the top of the chip counts.

When the six remaining players return to the Amazon Room of the Rio All Suites Hotel and Casino, they will be entering Level 21 of the tournament (blinds 8,000/16,000 – no ante). Play will continue until just one player remains with the third WSOP 2014 bracelet and winner´s cheque for $205,634.