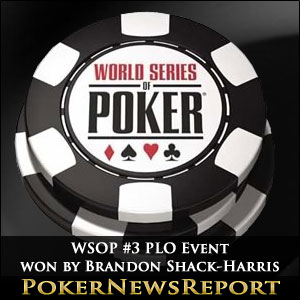 A runner-runner straight enabled Brandon Shack-Harris to deny Morgan Popham a remarkable comeback and to win the PL Omaha bracelet in WSOP 2014 Event #3.

1,128 players ponied up the more affordable buy-in and, by the end of Day 1, the money bubble had burst – assuring the 106 players who returned for Day 2 a min-cash of $1,928. After a further day´s action, just six players remained in pursuit of the PLO Event #3 bracelet – led by Steve Billirakis, who had denied Brandon Shack-Harris the chip lead in the last hand of the day.

There was a slow start to the final table of WSOP Event #3, and it took more than forty hands for the first player to leave – Robert Paddock seemingly getting his chips in at the right time with A♥ J♥ 10♠ 3♥ on the flop of Q♥ 4♠ K♥, but failing to find the outs he needed to improve past Steve Billirakis´ K♦ Q♣ 9♣ 4♦ flopped two pairs.

Billirakis then tried to take control of the final table, but two big losses against Brandon Shack-Harris and Morgan Popham saw him fall from the top of the leaderboard and – after Morgan Popham had hit a Seven-hit straight to eliminate Matt Ryan in fifth place – Steve Billirakis was the next player to depart.

After some aggressive betting by Brandon Shack-Harris (A♥ A♣ K♦ 10♠), Steve Billirakis found himself all-in with 8♠ 7♠ 6♦ 4♦ on the flop of A♦ 5♣ 9♠. The 3♥ on the Turn gave Billirakis a stack of outs to a straight to overcome Shack-Harris´ set of Aces, but the 3♦ was not one of them, and the dual WSOP bracelet winner was sent to the rail in fourth place.

With the elimination of Steve Billirakis, Brandon Shack-Harris vaulted into a massive chip lead, with his stack of 2,190,000 chips towering over those of his two opponents – Iori Yogo (700,000 chips) and Morgan Popham (500,000 chips).

That advantage was to increase to 3.39 million -v- 300,000 chips when Brandon Shack-Harris took the first four pots of the heads-up uncontested, but Morgan Popham was about to stage an incredible revival which almost ended in victory.

Popham Fights Back, but Shack-Harris gets Lucky

An uncontested 105,000 chip post-River bet into a pot of 280,000 chips enabled Morgan Popham to draw even closer to the chip leader, but his good run came to an end at the beginning of Level 25.

Morgan Popham was ahead before the flop and after the 8♦ 6♦ Q♥ delivered nothing for Shack-Harris on the flop. The J♦ on the Turn left Shack-Harris needing a King or a Ten to prevent Popham doubling up into the lead, and the 10♣ duly obliged on the River – giving Brandon Shack-Harris a straight and his first WSOP bracelet.