WSOP #3 Breaks Records as Klein Has No Small Lead

New records were set for a non-NLHE WSOP event, as 1,128 players ponied up the $1,000 buy-in for the Pot Limit Omaha Event #3 at the World Series of Poker. 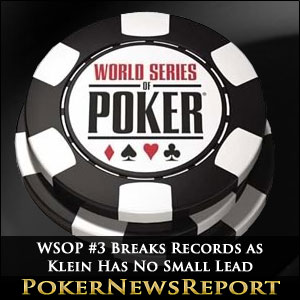 New records were set for a non-NLHE WSOP event, as 1,128 players ponied up the $1,000 buy-in for the Pot Limit Omaha Event #3 at the World Series of Poker.

For many players Event #3 marks the beginning of their 2014 World Series of Poker after the “closed” Event #1 (Casino Employees only) and the bankroll busting $25,000 buy-in Mixed Max Event #2.

However, for 1,011 of the players who entered the $1,000 buy-in Pot Limit Omaha event, it was a disappointing start to their Series, as just 106 players survived the opening day with eleven players having already made their way to the cashier´s desk to collect their $1,928 min-cash.

At the end of 10 Levels of play, Loren Klein from Colorado has a commanding chip lead – thirty-four big blinds clear of his closest competitor John O´Shea – with double the number of chips of any player in seventh place or lower and more than four times the average stack (31,925 chips).

Due to the record-breaking number of entries and tournaments in progress elsewhere in the Rio All-Suites Hotel and Casino, very few hands were reported from the Amazon Room – so it is not known how Klein amassed his super-sized stack, but it will be a colossal task for anybody to knock him from the top of the leaderboard when play resumes later today.

Further down the chip counts, Hoyt Corkins (24,600 chips) Stephen Chidwick (21,700 chips) and Jason Somerville (16,400 chips) will be looking for an early double up to get into contention, while four female poker players remain alive in the event – headed by Maria Ho who has 32,000 chips.

Top Players Fail after Busting Out of Mixed Max

Phil Ivey, Daniel Negreanu, Phil Hellmuth, Michael Mizrachi, and Jason Mercier all jumped into the Pot Limit Omaha Event after busting out from the $25,000 buy-in Mixed Max tournament and all failed to make any impression on the outcome of the event – other than bumping up the prize money.

Dan Smith was one of the eleven players who managed a min-cash before he too joined the list of top players to hit the rail – along with Huck Seed and Jeff Shulman – but with two more events getting underway tonight (a $1,000 buy-in NLHE Event and a $10,000 buy-in 2-7 Triple Draw Lowball Event) there will be plenty of action to keep the top players occupied.

When play resumes this evening in the Amazon Room, the 106 remaining players will be entering Level 11 with blinds of 600/1,200 (no ante). Play is schedule for another ten levels unless the nine-handed final table is reached beforehand (possibly by the dinner break judging on the rate of eliminations yesterday).

While many of the players have a significant amount of work ahead of them, those at the top of the chip counts can take the first couple of levels pretty easy – or in Loren Klein´s case – most of the day pretty easy!