WSOP 2017 Schedule Out – More Events than Ever Before

The World Series of Poker has released the schedule of events for this year´s summer jamboree, with more events included in the schedule than ever before. 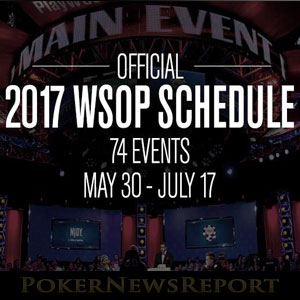 The World Series of Poker has released the schedule of events for this year´s summer jamboree, with more events included in the schedule than ever before.

Back in 1970, the first World Series of Poker comprised of a single high stakes Stud Poker cash game, with the winner – Johnny Moss – being determined by a vote. Fast-forward to 2017, and the forty-eighth World Series of Poker will consist of 74 tournaments with buy-ins starting at just $333.

The recently released schedule has plenty of familiar Championship events in it, several novelty events, the “weekend warrior” events, and three online events that will be played exclusively on Nevada´s WSOP.com site. Overall, there is something for everyone – plus, of course, the $10,000 buy-in WSOP Main Event.

The Series kicks off on Wednesday 31st May with the traditional Casino Employees event and with a Tag Team Championship unusually scheduled for the same day. The $8 million guaranteed Colossus III event starts on Friday 2nd June, with the highlights of the first weekend being the Stud Poker Championship and the PL08 Championship.

The first online bracelet is up for grabs on Saturday 3rd June – a $333 buy-in event with a $333,333 guaranteed prize pool – and the second week of the series is dominate by two Dealers Choice events and the NL Hold´em Heads Up Championship. The week concludes with the first of several Day 1s for the Giant – a tournament in which Day 1s are played every Friday until July 7th, with Day 2 being played on Saturday 8th July.

Other notable events during June include the Millionaire Maker (from Saturday 10th June), a five-day midweek Marathon tournament (from Monday 12th June), a Super Turbo Bounty event on Tuesday 20th June and the Monster Stack event (from Saturday 24th June). The month concludes with a Mixed Big Bet event (from Friday 30th June) in which the game changes every six hands.

The Action Continues throughout July

The packed schedule of events for July gets underway with a second online bracelet for High Rollers and the start of the Crazy Eights event. The Poker Players Championship takes the stage on Sunday 2nd July and, before the week is out there is a third online bracelet event and the $10,000 buy-in Ladies Event (discounted by $9,000 for players of the right sex).

Prior to the Start of the Main Event on Saturday 8th July there is a High Roller´s One Drop event (buy-in $111,111), and once all of the opening flights for the WSOP Main Event are out of the way, a Little One for One Drop is scheduled for Tuesday 11th July – players having the opportunity to increase their starting stack with a $111 donation to the One Drop Foundation.

Although the structure sheet for the WSOP 2017 Main Event has not yet been published, it is likely to be the same as [geolink href=”https://www.pokernewsreport.com/full-schedule-for-2016-wsop-released-20483″]last year´s “trial”[/geolink] – when players started with 50,000 chips (instead of 30,000) chips, the blinds started higher, and there was a flatter payout. The opening action of the WSOP 2017 Main Event is likely to continue until Monday 17th July when just nine players remain.

Bigger than Ever Before, but Better?

Over the forty-nine days of continuous action, the WSOP will also be hosting cash games and live satellites. In total, five hundred poker tables will be in play simultaneously over 100,000 square feet of the Rio Casino ballroom. Plus, of course, there is the online action.

Undoubtedly many of the world´s leading poker sites will be hosting their own online promotions, looking to qualify as many of their players for the WSOP 2017 as cheaply as possible. You can keep up-to-date with the best of the promotions by following Poker News Report on Twitter.

However, the glut of action that will descent on the Rio All Suited Hotel and Casino from 31st May makes you wonder what the players in that first ever World Series of Poker would think about the way in which the WSOP has expanded – and whether the kudos associated with winning a WSOP bracelet (which were not actually awarded until 1976) has diminished.

I still want one though.