The full World Series of Poker 2015 schedule has been released, with eleven new events among the roster of tournaments – including an online bracelet event. 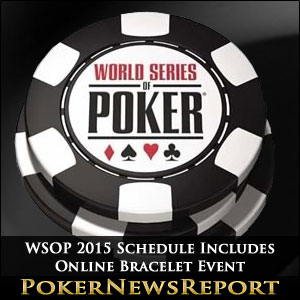 The full World Series of Poker 2015 schedule has been released, with eleven new events among the roster of tournaments – including an online bracelet event.

On Wednesday May 27, the cards will be in the air for the 46th World Series of Poker – the world´s most popular live poker tournament series. The 2015 WSOP runs until July 14th, during which time sixty-seven coveted WSOP bracelets will be awarded to the tournament winners.

The sixty-eighth and most important bracelet of them all, the WSOP Main Event bracelet, will again be awarded in November, when the “November Nine” re-convene at the Rio All-Suites Hotel and Casino – each player being guaranteed a minimum $1,000,000 for the first time ever.

As usual, the World Series of Poker kicks off with the Casino Employees Event, but thereafter takes a new direction on the opening weekend with a $5 million guaranteed “Colossus” Event – a $565 buy-in tournament that has four opening flights and which allows players knocked out from one flight to re-enter into a later flight. WSOP organisers expect the field size to set a new record for the largest ever live poker tournament – the current record being the 8,773 players that entered the 2006 WSOP Main Event.

The online WSOP tournament is Event #64 – a two day tournament with a buy-in of $1,000. The first day of the event will be played online on July 2, with the heads-up conclusion to the tournament being played live at the Rio on July 3. Unfortunately the tournament will only be accessible to players on WSOP.com in Nevada, and it is likely to result in players “multitabling” a live event at the Rio and the online event as well!

In addition to the new events at WSOP 2015, some of the existing ones have been changed to improve the structures and offer players more chips for their buy-ins. The majority of “low” buy-in tournaments (up to $2,500) will now include levels at 250/500 and 2,500/5,000 which will have the impact of extending the length of each tournament.

Players who enter events that have buy-ins of up to $5,000 will also be given more chips to play with – again extending the length of each tournament and providing more value to players:

Speaking about the changes to the WSOP2015 schedule and structures, WSOP Tournament Director Jack Effel said:

We feel very good about the WSOP 2015 schedule and appreciate all the feedback and assistance the poker community provided. We can´t wait to see everyone, break some records and award life-changing money beginning May 27

In the press release announcing the full WSOP 2015 schedule, organisers say that the Pavilion, Brasilia and Amazon ballrooms at the Rio “will be transformed into poker’s version of Woodstock”. We are not sure that a comparison with a field containing half a million semi-conscious and half-dressed hippies is what was intended, but we get the peace and love connection.

The full WSOP 2015 schedule can be found on the WSOP.com website or downloaded in PDF format from this link. The PDF download also includes details of the live satellites that will be played at the Rio prior to all the major events. Online satellites at WSOP.com should be announced in the near future.