Just five tournaments concluded at the 2014 WSOP this weekend as the Series heads in to a week which includes the Players Championship and Monsterstack Event. 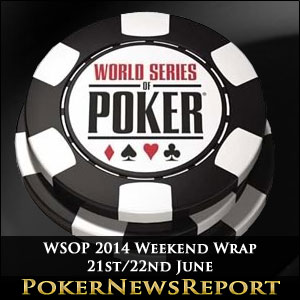 Just five tournaments concluded at the 2014 WSOP this weekend as the Series heads in to a week which includes the Players Championship and Monsterstack Event.

Although there are some massive events scheduled for the forthcoming week – culminating with the $1 million buy-in “Big One for One Drop” – there was no lack of enthusiasm for the events that concluded this past weekend – the feature of which was the “Dealer´s Choice” Event #41.

Almost $7.5 million was distributed in prize money over the past three days, with the biggest winner of the weekend being Sean Dempsey – who collected $548,360 for his victory in Event #39 – while the Mizrachi family adder another WSOP to their impressive collection when Robert won the Dealer´s Choice event.

992 players paid the $3,000 buy-in for Event #39 – a NL Hold´em tournament which ran into a fourth day with three players remaining. At the beginning of Day 4, Sean Dempsey was the shortest-stacked of the three, but a flopped pair of Kings helped him to double up against Jake Schindler´s A♣ J♦, and then a second unlikely double against Schindler Q♣ 2♦ > A♠ 3♠ (Dempsey flopped two pairs) elevated him into the chip lead.

Schindler doubled back against Dempsey, but was knocked out in third place when his A♥ J♥ missed its flush draw against Ryan Jaconetti´s A♣ Q♠; allowing Jaconetti to take a 6,165,000 -v- 2,765,000 chip advantage into the heads-up against Sean Dempsey. Dempsey levelled the chip counts when his 8♦ 8♥ held against Jaconetti´s A♦ Q♥, and then moved into the chip lead when his Q♥ 4♣ rivered two pairs to best Jaconetti´s paired Ace.

The final hand saw Ryan Jaconetti move all-in with Q♠ 10♥, and Sean Dempsey made the call with J♦ J♣. The flop of J♥ 9♦ 4♠ improved Dempsey´s hand to a set of Jacks, but Jaconetti was still alive with an open-ended straight draw. However, the board completed Q♣ and 4♥ to eliminate Jaconetti in second place and give the popular local player his first WSOP bracelet.

136 of the world´s best heads-up players entered the $10,000 buy-in Heads-Up Championship and, after two days of action, just Sam Stein and Davide Suriano remained. Both players had survived a tricky draw on their way to final – Stein including Bryn Kenney and Sam Trickett among his conquests, while Suriano had to overcome Scott Seiver and Dan Cates just to get into the round of 32!

In the final, Davide Suriano took an early lead by capturing four of the first five pots, and then rivered an Ace-high flush to extend his advantage. Sam Stein tried to apply some pressure – but lost a stack of his chips when Soriano made a Full House of Aces over Fours – and the event was over in just 36 hands after Stein moved all-in with K♦ 7♦, and Suriano made the call with A♠ 10♦.

Suriano made two pairs on the board of 3♦ 10♠ J♥ / A♣ / 5♠ to deny Stein his second WSOP bracelet and give Italy its seventh in WSOP history. Davide Suriano collected $335,553 for his victory – more than doubling his lifetime career earnings – while those who progressed to at least the quarter-final stage picked up the following amounts:

The “Dealer´s Choice” was a new event played in the 2014 WSOP and played 6-handed with two buttons. The first button denotes who is the “dealer” (and so determines where the blinds are) and revolves around the tables after each hand as normal, while the second button stays with one player for six hands – that player determining what discipline of poker is being played.

Players had a choice of sixteen different disciplines (Hold´em, Omaha, Stud, Draw, etc.) and, after three hours of action on Day 3, the final table was set with Aaron Schaff having a commanding advantage over his final table opponents. Schaff bust Frank Kassela in sixth place, and then Bill Chen and Daniel Idema in the same hand, to take a 1,185,000 -v- 700,000 chip advantage into the heads-up against Robert Mizrachi, who had hit Quad Aces to eliminate Shane Abbot in third spot.

Despite Robert Mizrachi having a WSOP bracelet in PL Omaha, Aaron Schaff selected this discipline of poker at every opportunity, and it proved to be his downfall. Mizrachi levelled the chip counts by taking down three substantial pots, and then took a 2:1 chip advantage with a Turned straight against Schaff´s trip Aces. The final hand (played at Ace-Five Triple Draw) saw Mizrachi make an almost perfect 6♠ 5♦ 3♦ 2♠ A♠ to relieve Schaff of the last of his chips and win the first “Dealer´s Choice” event played at the World Series of Poker.

Laak doubled-up Darius Studdard in the fourth hand of the final table, and was then the first to bust from the final table – his A♣ K♠ 8♣ 8♦ failing to improve past Brant Hale´s A♠ A♦ 5♦ 4♣. Hale missed his diamond flush draw to bust in fifth place against Darius Studdart´s Seven-high straight, and Ryan Schmidt soon followed him to the rail when Kory Kilpatrick rivered a King-high straight.

There was an exciting conclusion to Event #43 of the 2014 WSOP as the chip lead swayed one way and then another. Dan Kelly had gone into the final table with a significant chip advantage, but quickly lost it to Brandon Shack-Harris – who in turn chipped up Jeff Lissandro, who gave his chips to Yegor Tsurikov.

Tsurikov had nearly half the chips in play when the final table went five-handed, but Dan Kelly hit a Full House against the Ukrainian to move up into second place, and then took the chip lead once again during three-handed play when his J♦ 10♣ turned a Queen-high straight. Yegor Tsurikov almost levelled the chip counts when busting Brandon Shack-Harris in third place 10♣ 7♥ > 10♠ 8♥, but the heads-up was one way traffic – and Kelly had established a 2,150,000 -v- 800,000 chip advantage by the time the two players took their dinner break.

Thereafter, it took less than 30 hands for Dan Kelly to wrap up Event €43 of the 2014 WSOP – although he enjoyed a few fortunate River cards on his way to victory. A rivered Q♥ paired with Kelly´s Q♠ 2♣ to cripple Tsurikov, and – after Tsurikov had doubled-up – a rivered 6♠ helped Kelly knock down the Ukrainian once again. The final hand saw Tsurikov all-in pre-flop with 10♠ 6♣. The board ran 7♣ 8♥ 7♦ / Q♦ / 9♥ to give Tsurikov a Ten-high straight, but Kelly had J♠ 10♦ for a Queen-high straight and victory in the $1,500 buy-in Limit Hold´em Event.

Looking Ahead to the Coming Week

Three other tournaments got underway at the weekend – including the $50,000 buy-in Poker Players Championship. For many players, the 4-Day MonsterStack event which gets underway on Thursday will be the highlight of their week, while the Ladies Event gets underway on Friday.

The big game of the week ahead is of course the $1 million buy-in “Big One for One Drop” which has 42 players registered to date, and you can keep up-to-date on the outcome of all the 2014 WSOP Events by following @PokerNewsReport on Twitter.