It was a very busy weekend at the World Series of Poker, with six WSOP bracelets being decided and more than $10.6 million being distributed in prize money. 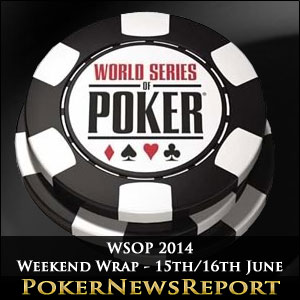 It was a very busy weekend at the World Series of Poker, with six WSOP bracelets being decided and more than $10.6 million being distributed in prize money.

Thousands of poker players rolled into the Rio All-Suites Hotel and Casino this weekend to compete in a series of low buy-in tournaments deliberately scheduled to attract the maximum number of recreational players.

Counting Friday as the first day of the weekend, Kevin Eyster got off to the best possible start when wrapping up Event #24 within twenty-four hands to beat Pierre Neuville in the heads-up of the 6-Max tournament that was carried over from Thursday night. Eyster collected $622,988 for his win, with the rest of the weekend´s payouts looking like this:

1,594 players entered the $1,500 buy-in NL Hold´em that concluded on Friday night. Andrew Rennhack won the event after entering the final table fourth in chips and doubling up early with A♦ A♣ > Geremy Eiland´s A♥ 8♥ on an Eight-high flop. Rennhack enjoyed a good bit of luck to take a 5.15 million -v- 2.05 million chip advantage into the heads-up against Michael Katz; and at one point Katz had reversed the chip counts on a one-way traffic final table. However, Rennhack found a pair of Kings when he needed them to double back into the lead, and shortly after wrapped the tournament when his pocket Sixes held against Katz´ K♠ 10♠.

The $1,500 buy-in H.O.R.S.E. Event of the 2014 WSOP attracted a lot of top names among its 743 entrants, and heading into the final table Jim Collopy was a massive chip leader following a hand of Omaha 08 in which he had eliminated Jared Talarico and crippled both Stewart Yancik and David Baker. However, Tommy Hang took out Brandon Guss and Kristan Lord in fourth and third places respectively to take a 2:1 chip advantage into the heads-up against Collopy, and he ground the former bracelet winner down over two levels of heads-up play to win the tournament. Hang´s winning hand more than a little fortunate – spiking a gutshot straight on the River with Q♥ J♣ against Collopy´s K♥ K♠.

There was a quite sensation climax to the $10,000 buy-in Pot Limit Hold´em tournament when Alex Bilokur over-turned a 9:1 chip deficit to defeat Matt O´Donnell in the heads-up climax to the event. O´Donnell had been on fire throughout the final table and had chipped up considerably when busting Chino Reem in fourth place (J♦ J♠ > K♥ Q♥ on the flop of K♠ Q♠ J♣) and Alexander Venovski in third place (10♠ 8♣ > A♦ Q♦ on the flop of J♥ 9♣ 7♣), but Bilokur doubled up twice to level the chip counts and then took the lead with rivered trip Queens. In the final hand, Matt O´Donnell moved all-in with A♣ Q♠ on the flop of 9♦ 2♣ 8♦. Alex Bilokur made the call with Q♦ J♦ and the 7♦ spiked on the River for Bilokur to complete his flush and win the bracelet.

For a while it looked as if Event #29 of the 2014 WSOP was headed for a fourth day as, going into Level 30 late on Sunday night, four players were still in contention for the $2,500 buy-in NL Hold´em tournament. However Justin Oliver eliminated Thad McNulty in fourth place A♠ J♣ > K♠ 8♠ and Pierre Milan bust Matt Salsburg A♥ K♠ > K♣ J♠ in quick succession to set the heads-up, with Oliver having an advantage of less than two big blinds against his opponent. The pivotal hand came just two hands into the climax of Event #29 – Milan (K♥ 6♠) flopping two pairs against Oliver´s (K♣ J♥) top pair, and doubling up into a 37:1 chip advantage. Thereafter the result was a formality, and Pierre Milan won the tournament in the next hand with a flopped pair of Tens against Oliver´s pocket Sixes.

There were a couple of familiar faces battling it out heads-up for the bracelet in Event #30 of the 2014 WSOP – the $1,500 buy-in 7 Card Stud Hi/Lo tournament – with Joe Tehan, who had gone into the final table of 2014 WSOP Event #25 with the chip lead, and Calvin Anderson who had final tabled in Event #22, being the last men standing from the 588 entrants. Anderson took a 2:1 chip advantage into the heads-up, but an intriguing dual ensued – which Andersen only got the better of with a rivered Ace-high flush after 40 minutes of play. Tehan got the last of his chips in showing 5♠ 2♦ / 3♥, but failed to make a low hand and was bust by Anderson´s two pairs.

Four other tournaments started over the weekend and will play down to a conclusion either tonight or tomorrow. Matt Stout heads the fifteen players remaining in the $1,500 buy-in NL Hold´em Event #31 after flopping a set of Fives in the last hand of the night to bust Allesandro Bardaro´s J♣ J♠, while Max Silver is enjoying a good run to head the field in pursuit of the $10,000 buy-in 6-Max bracelet in Event #32.

Event #33 is a $1,000 buy-in NL Hold´em tournament which attracted 1,688 players and saw the bubble burst during the last level of the night, while the final event to get underway this weekend was #34 – a $1,500 buy-in Stud Poker tournament which saw Daniel Negreanu, Stephen Chidwick and Phil Laak among the survivors from the 345 players that started the day.