WSOP 2013 Schedule Gets Thumbs Up

The schedule for the WSOP 2013 – which takes place at the Rio Hotel and Casino in Las Vegas from May 29 – has been well received by the poker community. 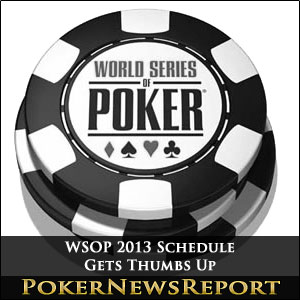 The schedule for the WSOP 2013 – which takes place at the Rio Hotel and Casino in Las Vegas from May 29 – has been well received by the poker community.

The release of the schedule for the World Series of Poker was a pleasant Valentine´s Day present for those looking forward to the 44th annual Las Vegas jamboree and contained several surprises to delight many of those asking for changes to be made to the previous formats.

The most popular change by far concerned the Ladies-only Tournament which has been given a price tag of $10,000, but discounted to $1,000 for players with ID that confirms they are female. Daniel Negreanu – who has been previously very vocal about male participation in the Ladies event – tweeted:

Bravo @WSOP addressing the issue of ‘men’ playing ladies events by making it a $10k and giving ladies a $9k discount! Very clever!

Another feature of the new WSOP 2013 schedule is the inclusion of a “Millionaire Maker” tournament on the first weekend of the series on June 1st (event #6). This $1,500 buy-in NL Hold´em tournament will be a single re-entry event which will guarantee the winner a first prize of $1 million and which has been carefully timed to encourage players to arrive at the start of the series (and not wait until after the ISPT Wembley).

Other “low-entry” three-day tournaments have been scheduled for weekends during the series to allow those who cannot commit six weeks of their lives a chance to get in and out of town, while the structure of events which have large buy-ins has also been changed (playing eleven levels rather than ten on Day 1) to ensure the cash is reached early on Day 2 and to prevent the well-subscribed tournaments running into a fourth day.

Although the “Big One for One Drop” was a huge success last year, the $1 million buy-in tournament is not going to be repeated in this year´s schedule – instead planned to make a re-appearance in 2014. For 2013, the WSOP are offering two “Little Drop” tournaments – one with a buy-in of $1,111 plus unlimited re-buys for the first four levels on each of the two starting days (July 3rd and 4th) and a Hi-Rollers “Little Drop” on June 26th with a buy-in of $111,111.

Players who cash in any event in the WSOP 2013 schedule are also being invited to donate 1% of their winnings to the One Drop charity. If last year´s WSOP Player of the Year and Main Event winner did so, it would have made a nice donation of $85,000 to a worthwhile charity, but for most players min-cashing in a “low-entry” tournament, 1% of their prize money may only mean a donation of $25.00-$50.00.

Other Highlights of the WSOP 2013 Schedule

Among some of the more eagerly anticipated tournaments among the 62 event series are the $10,000 buy-in heads-up championship (moved back in the schedule to event #16 on Friday June 7th), the $50,000 buy-in Poker Player´s Championship (a five-day, eight-discipline tournament which starts on June 30 – event #55) and a non-bracelet Open Face Chinese Poker tournament with a $5,000 buy-in which takes place during Day 5 of the WSOP Main Event on Saturday July 13th.

The $10,000 Main Event itself runs from Saturday July 6th to Monday July 15th when play will be concluded until the “November Nine” reassemble later in the year. WSOP Tournament Director Jack Effel – who will oversee the World Series of Poker for the eighth consecutive year – said

We think this is the most diverse schedule we’ve ever had and we’ll be ready for an all-time turn-out at the 44th annual WSOP.

During which, of course, you will be able to follow all the news on PokerNewsReport.