Day 6 of the WSOP Main event is over and Anton Morgenstern is the new player on top of the chip ladder, with a stack of 21,955,000 to his name. 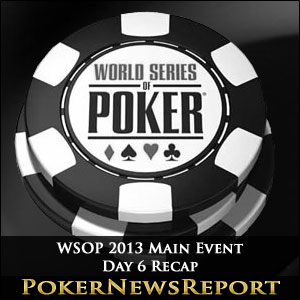 Day 6 of the WSOP Main event is over and Anton Morgenstern is the new player on top of the chip ladder, with a stack of 21,955,000 to his name.

Anton Morgenstern is the only player who will go into the seventh day of play with over 20 million chips. He holds a commanding chip lead over the rest of the remaining 27 player field, with Sylvain Loosli having the second largest stack with 14,125,000 chips.

He is followed by Chris Lindh, who is not too far behind with a little over 12 million chips to his name. JC Tran will enter Day 7 fourth on the chip ladder with 11,970,000 chips while Fabian Ortiz comes in fifth spot with a little over 10.8 million.

2001 WSOP Main Event winner Carlos Mortensen also made it to the seventh day of action, the only previous Main Event winner to do so. He is in a solid position to get a second Main Event win on his resume as he is currently sixth on the chip ladder with a stack of 10,790,000.

George Wong was the last player to be eliminated on the sixth day of play. Wong lost a showdown to the chip leader that put him out of the event in 28th spot. After few reraises and reraises, Wong moved all in with A♦ J♣ before the flop and was called by Morgenstern, who showed 9♠ 9♣.

The German’s Nines held on the 10♣ 2♥ 2♦ 6♥ 2♣ board, and even got a full house to strengthen his hand and knock Wong out of the event to end Day 6 as well as Wong’s time in the tournament.

The last woman in the Main Event, Jackie Glazier, was eliminated from the tournament in the late stages of the day after coming second best in a showdown against Sergio Castelluccio. Castelluccio raised to 200,000 with 10♥ 10♦ before the flop.

He was reraised by the Australian, who went all in for 1,975,000 with A♠ Q♠ and was called by Castelluccio. The flop came 9♥ 9♠ 9♣, which gave Castelluccio a full house but still gave Glazier a few potential outs on the turn and river.

The 5♣ on the turn was not one of them, however, and nor was the K♥ on the river, which meant Castelluccio’s full house won the hand and Glazier was knocked out in 31st place. That was still good for a pay out of $229,281.

WSOP Asia Pacific Gold Bracelet winner Jim Collopy was also knocked out on Day 6. He finished up in 51st spot after losing his last hand of the Main Event to Benjamin Pollak. Pollak hit a pair of Aces on the flop with his A♣ Q♥, which put him further ahead of Collopy’s J♥ 5♥.

The 4♠ on the turn and 4♣ on the river did not help Collopy and he was eliminated from the tournament in the middle stages of the day. The win put Pollak to over three million chips, which helped him make it to end of the sixth day of play.

Day 7 of the WSOP Main Event is set to get underway tomorrow afternoon in what will determine who out of the remaining 27 players will be part of the November Nine.