Matthew Waxman has won the WSOP $1,000 No Limit Hold’Em event, earning his first ever WSOP Gold Bracelet and $305,952 in the process. 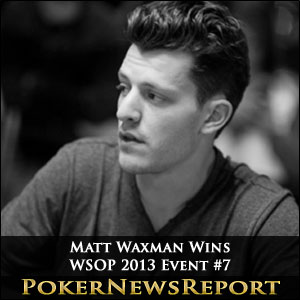 Matthew Waxman has won the WSOP $1,000 No Limit Hold’Em event, earning his first ever WSOP Gold Bracelet and $305,952 in the process.

He beat a field of 1,837 players including a number of seasoned poker professionals and amateurs alike en route to winning the three-day event.

Jason Koon was the first to go from the final table after his A♣ 4♥ was no match for the K♠ K♦ of Brent Hanks. Hanks also doubled through Amit Makhija in the hand after he called on all in with K♣ Q♣, which was unable to beat Hanks’ pockets.

Eighth place would go to Tuu Ho, who was eliminated from the event by Waxman. Ho, who had A♦ Q♦, reraised Waxman all in before the flop. That was called by Waxman, who showed Q♠ Q♥, which held to win the hand after neither an Ace nor Diamonds came on the board.

Waxman then went on to claim his second scalp in a row after he eliminated Robert Dreyfuss in seventh place. Dreyfuss, who had A♣ 7♣, moved all in for 179,000 before the flop, which was called by Waxman, who held A♥ 9♥. Waxman hit a 9 on the flop, which cemented his lead over Dreyfuss and won him the hand.

Eliminated in sixth place was Jacob Jung, who was knocked out by Jess Dioquino after his 7♣ 6♥ hit a full house on the turn. Jung’s King high was no match against Dioquino’s hand and he exited the tournament with $51,086, his first ever cash win at the WSOP.

One-time WSOP Gold Bracelet winner Brent Hanks called an all in by Eric Baldwin before the flop with 8♣ 8♥, which dominated Baldwin’s 3♠ 3♥. Hanks got a severe setback, however, after Baldwin hit a 3 on the flop. No Eight came on neither the turn nor the river, which gave Baldwin the hand and eliminated Hanks from the event in fifth spot.

Waxman claimed his third final table scalp about an hour after Hanks’ elimination when he knocked Amit Makhija out of the event in fourth place. Makhija had a strong starting hand with Q♠ Q♦, but it was no match for the chip leader’s A♦ A♥, which held on the board to further boost Waxman’s stack in time for three-handed play.

It did not take long for three-handed play to turn into heads-up play after Dioquino was knocked out in third place by Baldwin, though it took two hands to finish him off. Baldwin doubled up against Dioquino after his J♥ J♦ held on the board against Dioquino’s 10♣ 10♥, which left Dioquino with just 102,000 chips.

The short stack immediately moved all in the next hand and was once again called by Baldwin. Dioquino would need a bit of luck on his side if he was to double up as his Q♣ 2♥ was dominated by Baldwin’s Q♠ 10♠. This did not happen, however, as no 2 came on the board, once again giving Baldwin the hand and sending Dioquino packing with $130,825 for his third place finish.

Dioquino’s exit left Baldwin and Waxman to battle it out for top spot, and neither of them would give up without a fight. The lead between the two players seesawed frequently during heads-up play, but Waxman soon got a major chip lead and, after seven hours, he finally had Baldwin right where he wanted him.

The last hand of the tournament saw Baldwin move all in before the flop which was promptly called by Waxman. Baldwin showed 7♦ 4♥ and Waxman showed A♥ 5♠, which gave him the better hand before the board was shown.

Waxman hit top pair on the flop after A♦ 10♥ 3♠ was shown. The 6♠ on the turn gave Baldwin an inside straight draw for a potential chance to stay in the tournament, but this was not to be as the 6♣ came on the river, eliminating him in second place and making Waxman the event’s winner.