The ladies are on fire at the WSOP, with Harwood winning the $1,500 No Limit Hold’em event, the third WSOP event to be won by a female in a little over a week. 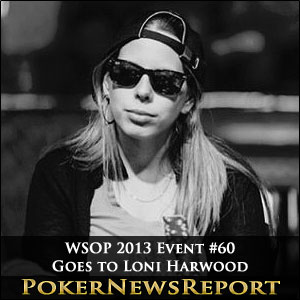 The ladies are on fire at the WSOP, with Loni Harwood winning the $1,500 No Limit Hold’em event, the third WSOP event to be won by a female in a little over a week.

Harwood beat a field of 2,541 to win her first ever WSOP Gold Bracelet along with a cool $609,017 prize money. She had a great final table, knocking out the majority of players on it en route to taking top spot in the tournament.

Hiren ‘Sunny’ Patel was the first player to be knocked out of the final table after he came second best in a showdown against Yongshuo Zheng. Patel moved allin for his final 270,000 chips with 10♣ 10♦ and was called by Zheng, who was slightly behind with A♣ K♠.

Zheng managed to get in the lead after the flop, which came Q♠ A♦ 2♦, and he stayed there after the turn showed J♥ and the river came 9♣.

Zheng then went on to claim his second straight final table scalp after he eliminated Bijon Notash from the event. Notash went all in before the flop with Q♠ Q♦. While that is a solid hand in pretty much all circumstances, Zheng was able to better him with A♣ A♥.

The Aces were able to hold on the J♠ 9♥ 4♠ K♥ 3♥ board and, just like that, Notash was knocked out of the event in eighth spot.

Next to go was Cy Williams, who was knocked out of the final table by the eventual winner. With 10♣ 10♠, Williams went all in for 750,000 before the flop only to be called by Harwood, who had a higher pair in Q♠ Q♣.

Harwood’s Queens stayed in front after the flop came K♥ 5♠ 6♥, an stayed there when the turn showed 3♥ and the river came 3♦. The win put Harwood’s stack to over 4 million while eliminating Williams in seventh spot.

Harwood then went on to get her second straight scalp after she eliminated Daniel Cascado from the tournament in sixth place. Cascado went all in before the flop with 6♠ 6♥ and was then called by Harwood, who showed A♦ J♣.

Despite being behind, Harwood went in front after an Ace came on the K♥ A♣ Q♠ flop. The 10♦ on the turn was of no help to Cascado and nor was the 7♥ on the river, and he was knocked out of the tournament as a result.

Fifth place went to Ari Moshe, who fell victim to Mika Paasonen after he lost a showdown against the Finn. Paasonen went all before the flop with 9♣ 9♦ and was called by Moshe, who was behind with A♣ 7♥.

The eventual winner then struck again when she eliminated Yngve Steen from the event in fourth place. It came after Steen went all in before the flop with K♥ 7♥, but unfortunately for him, he was outkicked by Harwood, who called with K♠ Q♦.

Harwood went further ahead when the flop came Q♠ 10♦ 2♣ to give him top pair. The 5♠ on the turn effectively ended Steen’s time in the tournament as he was drawing dead. That was confirmed when the 5♥ came on the river, which gave Harwood a massive chip lead in three haned play.

Paasonen was then knocked out of the event in third place , which also came at the hands of Harwood. Harwood was actually behind when she moved all in before the flop with K♠ 4♣, but had live cards to compete with the Finn’s A♦ 6♠.

They proved helpful to her after the flop came 8♦ 3♠ 4♠ to give her middle pair. The 8♥ on the turn and 9♠ on the river were not the cards Paasonen needed, and he was eliminated from the event in third spot.

The elimination put Harwood and Zheng in heads-up play, with Harwood holding a 6.2 million chip lead when play began. Zheng did his best to come back, however, and he was up to 4.2 million chips at one point, but it was enough as Harwood eventually reigned supreme.

In the last hand of the tournament, Zheng went all in with A♠ Q♦ after the river of a board that came J♣ K♣ 8♠ J♥ 10♠. It would have been a bad move in most circumstances, as Zheng had the nut straight.

Now was not one of those circumstances, unfortunately, as Harwood called and showed J♦ 10♦, which gave her a full house on the river. That was good enough to win her the hand and send Zheng packing in second place while Harwood was crowned winner of the event.