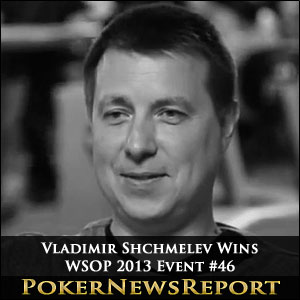 Before Friday morning, Vladimir Shchmelev shared the dubious honor of being one of only a few poker greats never to taste poker gold. The runner-up of 2010 Players Championship, the St. Petersburg resident had been featured at an astounding six final tables, all within the past six years. But try as he may, Shchmelev was never able to seal the deal. That is, at least until now. After a hard fought battle against several bracelet winners and other recognized pros, Shchmelev would finally win his first bracelet in this year’s $3,000 buy-in O8 tournament.

Shchmelev is one of a select few pros to exhibit proficiency in all forms of poker. He is an Eight Game specialist, final tabled a S.H.O.E tournament and twice finished 7th in Seven Card Stud events. Just this year, he banked an 8th place finish in the $5,000 7-Stud Hi-Low tourney. He is the 27th player to make multiple final tables this year. And who said poker was a game of luck?

The Russian’s journey towards poker immortality would not be an easy one. Event #46 was stacked with big names such as Joe Hachem, Gavin Smith and Mike “The Mouth” Matusow. Three of the nine players at the final table had won bracelets before, including “Miami” John Certuno and Allyn Jaffrey Shulman. Wife of multiple bracelet winner Barry, Allyn Jaffrey shocked the world by taking down the 2012 Seniors Event. She is also well-known as the most overly enthusiastic railbird in the history of poker.

But for all the big names in this year’s tournament, it was poker relic Mel Judah who stood as the only remaining obstacle in Shchmelev’s way. Judah, who had won his last bracelet before most online pros could spell P-O-K-E-R, is at 65 one of the oldest players participating in this year’s WSOP. Exhibiting unparalleled experience and a tenacity usually only found in players half his age, Judah would enter heads-up play at a substantial chip deficit, but fought back valiantly and at one point drew even with Shchmelev.

Unfortunately, Judah would become the victim of a sick cooler. Holding A-5-6-K (two clubs) Judah raised preflop and Shchmelev called. The flop of 5-2-5 rainbow looked fantastic, and even though Shchmelev raised him on the flop, Judah had far too strong of a hand to even consider folding. The turn brought the 9 of clubs, giving Judah a flush draw to go along with his nut-trips and A-6 low draw. Shchmelev potted, Judah shoved and quickly saw the bad news. Shchmelev had flopped deuces full.

However, Judah was still drawing to a better low and could pair any of his cards to make a better full-house or quads. Alas, the poker gods were not on The Silver Fox’s side, as the river brought the Queen of Spades. Judah gracefully accepted his second place finish and the more than $172k in prize money that came with it.

For Shchmelev finally winning a gold bracelet was a surreal experience. Of course, the $279k he received for first place probably didn’t feel too bad either. But considering that the 40-year-old has had significantly bigger cashes, and commonly plays in high buy-in tournaments, one has to imagine that the money meant nothing compared to finally capturing the greatest reward in poker: a WSOP bracelet.