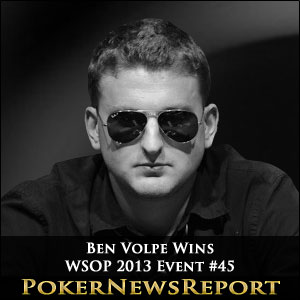 Samuel Panzica was the first player to be eliminated from the final table after being eliminated by Paul Lieu. Panzica, who had A♦ J♠, was outkicked by Lieu, who called his all in with A♠ Q♣. Lieu cemented his lead on the turn when he hit a Two Pair and Panzica was knocked out of the three day tournamentin ninth place.

Danny Johnson was eliminated in eighth place after he lost a showdown to Blair Hinkle. Johnson moved all in after hitting a flush draw on the 3♠ 6♣ 9♠ flop with Q♠ J♠ and was called by Hinkle, who had a two pair with 9♦ 6♥.

Johnson hit his flush on the turn when the 9♠ was shown, but unfortunately for him, the card also meant that Hinkle had a full house, which won him the hand and sent Johnson packing from the final table.

Hinkle then went on to claim his second successive final table scalp after he eliminated Adam Stone from the tournament. Down to just 32,000 chips, Stone called Hinkle’s 33,000 raise with J♦ 6♥ and was behind before the flop against Hinkle’s Q♦ 5♣. Hinkle’s hand held on the A♣ 10♥ A♥ K♣ 9♦ board and Stone was knocked out in seventh place.

Lieu then claimed his second final table scalp after he knocked Horacio Chaves out of the tournament in sixth spot. After a series of pre flop raises and reraises Chaves moved all in with A♥ Q♠ and was called by Lieu, who showed K♣ K♦. The Kings held on the board, which won Lieu the hand and put the event down to its final five players.

Chris Moorman was the next player to be knocked out of the event after he lost his final hand to Lieu, who claimed his third scalp of the final table. With 8♦ 5♦, Moorman moved all in after the flop, which showed 10♣ J♥ 8♥ and was called by Lieu who was ahead with 10♠ 8♣.

The J♣ on the turn kept Lieu in the lead and Moorman needed a near miracle on the river to stay in the event. It did not happen, though, as the river came 3♣, giving Lieu the hand and ending Moorman’s time in the tournament.

Lieu then made it three in a row after eliminating Hinkle from the final table when he won a showdown between the two of them. Lieu initially raised to 40,000 with Q♣ Q♦ and was reraised by Hinkle, who went all in with A♥ 3♥.

The flop came J♥ Q♠ 4♠, which gave Lieu a set and put Hinkle in grave danger of being knocked out of the tournament. The 4♦ on the turn and 7♠ on the river did nothing to help Hinkle’s plight and he finished the event in fourth place.

The J♠ on the turn and the J♥ on the river ensured that Volpe’s hand stayed superior and Bonnecaze was knocked out with $80,839 for his efforts in the three day tournament.

Bonnecaze’s elimination left Lieu and Volpe with heads-up play, with Volpe holding a slight chip lead when play began. It was not long before Lieu took the lead, however, but lost it to Volpe after losing some key hands.

Volpe called and needed a club if he was to win the event. The 10♦ on the turn was not the card he needed and Lieu’s Aces stayed in the lead. Volpe got his break on the river, however, when the K♣ was shown, giving him the flush he needed to win the hand and the event.