Beauprez has beaten a field of 1,069 to take out the WSOP NL Hold’em 6-Handed Event. Beauprez won $324,764 and a WSOP Gold Bracelet for getting first place. 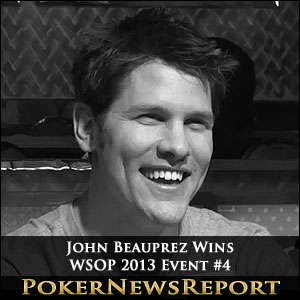 John Beauprez has beaten a field of 1,069 to take out the WSOP No Limit Hold’em Six Handed Event. Beauprez won $324,764 and a WSOP Gold Bracelet for getting first place in the event.

With a stack of 1,233,000, Beauprez was second on the chip ladder when the final table began. However, he was just 1,000 chips below the chip leader, Mike Mustafa, which set the stage for an entertaining end to the tournament.

It did not take long for the eventual winner to take the chip lead after eliminating Kevin Stammen from the event in sixth place. Stammen went all in before the flop after reraising Beauprez. He called and showed A♠ A♦ while Stammen had 2♠ 2♥. Beauprez’s Ace held on the board and his stack increased to a little less than 1.6 million.

In a major turn of events, Mike Mustafa went from chip leader to being eliminated in fifth place in a matter of hours. His elimination was the culmination of a series of losses to Eric Blair, who twice doubled up after winning hands against Mustafa. Those double ups contributed to lowering Mustafa’s stack to just 57,000, so it was no surprise that he shipped it when he had the chance.

Once again though Blair beat Mustafa, but instead of doubling up he eliminated him from the event after his 7♦ 7♥ won the hand. The series of wins against Mustafa meant that Eric Blair propelled himself into the chip lead with four players remaining.

Next to go was 2009 WSOP Main Event Winner Joe Cada, who was eliminated at the hands of Manig Loeser. Loeser raised to 74,000 before the flop and Cada responded by moving all in for around 610,000 chips, which was called by Loeser.

Cada, who had A♣ 7♥ was outkicked by Loeser and his A♦ 9♦. To make matters worse for Cada, Loeser hit a nut flush after the flop came all diamonds and he was sent packing with $83,558 for his play in the event.

The elimination put Loeser at the top of the chip ladder, but that would change soon enough after previous chip leader Eric Blair was knocked out of the tournament. Blair was eliminated in third place by Beauprez to put the event in heads-up play.

Blair raised to 60,000 pre flop with his J♥ 8♥ hand before Beauprez three-bet from the small blind to 145,000 with A♥ J♦. That was called by Blair and a flop of J♠ 9♣ 3♣ was shown, giving both players top pair, with Beauprez having the far better kicker.

A bet of 170,000 was made by Beauprez after the flop, which Blair responded to by moving all in. Beauprez snap called and Blair was in dire need of some good cards if he was to stay in the event. This did not happen, however, as the K♠ came on the turn and the 4♦ came on the river giving no help to Blair and eliminating him in third place.

Beauprez held a small chip lead at the start of heads-up play with Loeser, but that changed hands as if it was a hot potato. The momentum swang Beauprez’s way in the later part of play, though, after a hand where he hit a flush on the river, winning a little over half a million chips and putting his stack to over three million.

In the final hand of the event, Loeser raised to 100,000 chips and Beauprez reraised to 230,000 before the flop. Loeser then went all in which was called by Beauprez and a showdown was underway.

Beauprez, who had A♥ 8♥ was outkicked by Loeser, who had A♦ K♣, but the 8♠ on the flop had him in the lead. The 5♦ on the turn and the 4♥ on the river did not give Loeser the break he needed and he was eliminated in second spot.

The $324,764 cash prize is the highest win of Beauprez’s poker career, while the WSOP Gold Bracelet is his first.