Oliver has won his first ever WSOP Gold Bracelet after he took out the $2,500 No Limit Hold’Em Four Handed event, besting a field of 566 players and winning $309K. 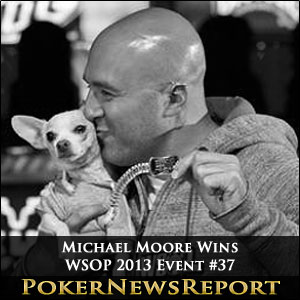 Justin Oliver has won his first ever WSOP Gold Bracelet after he took out the $2,500 No Limit Hold’Em Four Handed event, besting a field of 566 players and winning $309,071.

Eight players took part in the third and final day of play, but that was quickly decreased as players were hungry for the tournament’s top spot and, soon enough, a final table was set.

Jonathan D’Souza was the first player knocked out on Day 3 after losing a hand to eventual fourth place getter David Pham. He was soon followed by Mike DeGilio, who was eliminated in seventh place by the eventual winner, and Daniel Park, who lost a showdown to Jared Jaffee to be sent packing from the tournament in sixth spot.

The official final table began with only three players after the last hand before it resulted in the elimination of two players from the event. Those players were John Juanda and Pham, who were both knocked out by Nick Schwarmann.

Schwarmann, who had A♠ 7♠, raised to 32,000 before the flop and was called by both Pham and Juanda. The Q♠ 3♥ 4♠ flop gave Schwarmann a nut flush draw, while Pham flopped a lower draw with K♠ J♠. Juanda on the other hand, had Q♣ 2♣ and was the only player with a pair after the flop.

He checked the flop, but Schwarmann followed through on his pre flop raise by betting 43,000, which was called by Pham. Perhaps hoping to scare the other players off, Juanda moved all in, but it would not deter Schwarmann as he instantly called. After some thinking and confirmation that he would get fourth place if he lost the hand, Pham also called and all players showed their cards.

The 5♦ on the turn kept Juanda in the lead and he was looking in better shape to win the hand and remain in the event. That all changed on the river, however, when the 3♠ was shown, giving Schwarmann the nut flush he was after while putting the tournament down to its final three players.

Jaffee was the first player to be eliminated from the final table after he was knocked out by Schwarmann, who claimed his third straight scalp of the tournament. Schwarmann raised to 35,000 before the flop and was called by Jaffee.

The flop came 7♦ 6♣ Q♣, which gave Jaffee top pair with Q♦ J♦ and Schwarmann a flush draw with 10♣ 5♣. After a number of raises and reraises between the two, Schwarmann moved all in and Jaffee responded by calling.

It appeared that Jaffee was going to stay in the tournament after the turn showed the Q♠, giving him three of a kind, while Schwarmann was still chasing a club. Schwarmann got what he needed on the river when the last card on the board was the 9♣, winning him the hand and eliminating Jaffee in third place.

Jaffee’s elimination left Schwarmann and Justin Oliver as the two remaining players in the event, with Schwarmann holding a substantial chip lead when heads-up play began. Schwarmann dominated early and had the eventual winner down to just a few hundred thousand chips at one point.

From there it was all Oliver as he kept the lead the chip lead en route to getting first place in the event. In the tournament’s last hand, Oliver raised to 60,000 before the flop and Schwarmann reraised to 175,000. Oliver then reraised to 350,000 and was called.

Both players checked the 5♦ 9♥ 8♠ flop and it was the same story after the K♣ came out on the turn. Things changed on the river, however, after it came 6♦. Schwarmann, who had J♦ 10♠ moved all in on the river, hoping to bluff and win the hand.

Oliver, who had K♠ 4♦ for top pair, had other ideas. He called and won the hand, eliminating Schwarmann in second place and taking out the event.