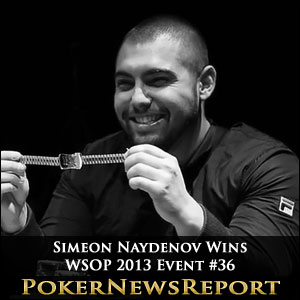 Noah Bronstein was the first player to be eliminated from the final table after losing a showdown against the eventual winner. Bronstein reraised Naydenov all in before the flop with J♠ 10♦, and he was in trouble early after Naydenov called with A♥ 9♠.

Naydenov’s Ace high remained dominant after the flop and turn as neither player hit any of their cards, but Bronstein’s fate was sealed on the river after the 9♥ was shown. That gave Naydenov a pair of Nines to confirm the hand as his while knocking Bronstein out in ninth place.

Salman Behbehani was eliminated from the event a short time later in eighth place. He came off the wrong end of a showdown against Jake Schwarz despite originally looking in strong shape to win the hand.

Behbehani showed K♥ K♦ after Schwarz called his all in from the flop with A♠ Q♦. The Kings were good on the flop was the J♣ being the highest card shown, but the turn – the A♦ – was not so kind to Behbehani. That put Schwarz in the lead and kept him there as he won the hand and sent Behbehani packing.

Just five hands later, Jan Kropacek was knocked out of the tournament by Andrew Kloc after he was outpocketed. Kropacek moved all in pre flop with 8♣ 8♠, but unfortunately for him, Kloc had 10♠ 10♦ and he was not going to fold them. The Tens held up on the board and, just like that, Kropacek was eliminated from the event in seventh place.

Naydenov then went onto claim his second final scalp when he eliminated Mike Watson from the table in sixth spot. After a few pre flop raises and reraises, Naydenov moved all in with 9♥ 9♦ and was initially in a lot of trouble when Watson snap called with Q♥ Q♠.

Watson’s Queens stayed ahead after the 4♣ A♥ K♣ came on the flop,but the 9♣ on the turn gave Naydenov a set to put him ahead. The J♦ on the river did not help Watson and he was knocked out of the event.

It only took another seven hands after Watson’s elimination for fifth place to be decided. That went to Nacho Barbero, who came off second best in a showdown against Tobias Wenker. Barbaro, who hada stack of 332,000, went all in before the flop with Q♥ 10♥ and was called by Wenker, who showed A♠ K♠.

Wenker hit a pair of Kings on the flop, which further cemented his lead and was all that was needed to win the hand while knocking Barbero out of the tournament.

Barbero’s elimination did not help Wenker very much, however, as he was the next player to be knocked out of the final table. It came at the hands of Schwarz, who called Wenker’s K♥ J♥ all in with A♠ A♥. The Aces held on the 3♣ 8♠ 4♥ 9♠ 3♠ board and Wenker was eliminated in fourth place.

Kloc was the next player to be sent packing after he was eliminated by Naydenov in third place. It was Schwartz who began the action after he raised to 60,000 before Naydenov reraised to 165,000. Kloc, who had A♣ 9♦, then moved all in to which Schwartz folded and Naydenov called with A♦ J♣.

Both players hit the flop after it came 5♦ 9♦ J♣, but Naydenov remained in the lead and it would stay that way after the turn showed A♥ and the river showed A♠. That gave Naydenov the higher full house which won him the hand and knocked Kloc out of the tournament.

Kloc’s elimination left Naydenov and Schwartz as the last two players in the event, with Naydenov having slightly more than a 3 to 1 chip lead when heads-up play began. That may have been a major reason why heads-up play lasted just 10 hands as the Bulgarian took out the event.

In the last hand of the tournament, Schwartz raised to 60,000 before the flop and was called by Naydenov. The flop initially looked good for Schwartz and his A♥ 9♦, with the 4♠ A♠ 9♠ flop giving him two pair. However, it was even better for Naydenov, who hit the nut flush with his K♠ 8♠.

Both players then went about a series of raises and reraises with each other, which eventually led to Naydenov to move all in. He was called by Schwartz who needed a near miracle to stay in the event. That did not come as the 7♦ on the turn and 2♥ on the river secured the hand for Naydenov and won him the event.