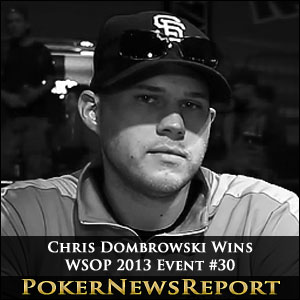 Jonathan Thompson was the first player to be exit from the final table after he was eliminated by Mathew Moore on the tenth hand. Thompson had a solid starting hand with A♣ Q♣ and was only slightly behind Moore, who had 10♣ 10♦.

The 10♠ was one of three cards that came on the flop, which gave Moore a set and ultimately won him the hand, sending Thompson out of the event in ninth place.

Next to go was Mike Pickett, who came off the wrong end of a showdown against Dimitar Yosifov. After a 40,000 pre flop raise from Yosifov, Pickett moved all in with K♦ J♥ and was called by Yosifov, who showed A♥ J♠. Yosifov’s Ace high held on the board and Pickett was eliminated from the tournament in eighth spot.

It took just two more hands for the next elimination to occur as Matt Seer was knocked out of the tournament in seventh place. After a number of raises and reraises before the flop, Seer moved all in before being called by Chris Dombrowski.

It was another close showdown, with Seer showing A♦ K♠ while Dombrowski was slightly ahead with J♥ J♠. Seer moved ahead after the flop, however, which showed K♦ K♥ Q♣. Unfortunately for Seer though, the J♦ was turned on the river, which gave Dombrowski a full house and won him the hand.

Yosifov then went on to claim his second final table scalp after he took out Chris Bolek in sixth place. Bolek, who was short stacked by that point, moved all in before theflop with A♠ 4♦ and was called who Yosifov, who showed Q♦ Q♥. Despite Bolek hitting a pair of Fours on the flop, Yosifov’s Queens held on the board and Bolek was knocked out of the event.

It was then Dombrowski’s turn to take a second final table scalp as he went on to eliminate Carter Myers from the tournament. Myers, who had A♥ 8♠, went all in before the flop and was called by Dombrowski, who outkicked Myers with A♠ J♥.

Both players hit an Ace on the flop, but Dombrovski stayed ahead, and it stayed that way after the 3♣ on the turn and the 2♣ on the river did not help Myers’ hand.

Yosifov was knocked out of the event in fourth place just three hands after Myers’ elimination when he lost a showdown to Jesse McEuen. McEuen called Yosifov’s all in with A♣ 10♥, which outkicked the Bulgarian’s A♦ 2♣. McEuen’s hand remained ahead on the flop and turn, and the 10♦ on the river put him further ahead and cemented his win while eliminating Yosifov in fourth place.

Despite the elimination, McEuen would be the next player to exit the tournament, although it took a number of hours to do so. In what was a trend of final table eliminations due to being outkicked, McEuen, who had A♠ 7♠, was knocked out after the eventual winner showed A♣ 10♦.

Dombrowski’s Ace high held on the board, and hit a nut flush on the river after four clubs came on the board. Just like that, McEuen was eliminated from the event in third place with $149,850 for his efforts.

McEuen’s elimination left Dombrowski and Moore as the last two players in the tournament, with Dombrowski having a considerable lead when heads-up play began. Moore would not go out quickly, however, and it took Dombrowski a little over two hours to finally eliminate him from the event.

In the last hand of the tournament, Dombrowski raised to 200,000 before the flop, which led Moore to move all in for about 1.6 million with K♥ 6♦. Dombrowski, who had A♥ 7♠ promptly called and found he was in a good position to win.

The Q♦ 2♦ A♣ on the flop put the eventual winner further ahead and Moore needed a near miracle if he was to stay in the event. It was not to be, however, as the 5♠ on the turn and 4♦ on the river kept Dombrowski in the lead and he won the hand and the event.