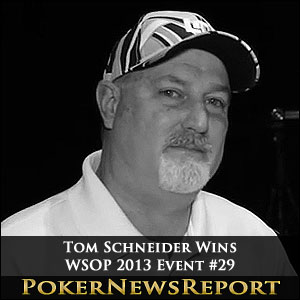 And who says you can’t teach an old dog new tricks? In what goes down as one of the most impressive feats in recent WSOP history, 53-year-old Tom Schneider swept the H.O.R.S.E events, becoming part of an exclusive club of players to win more than one piece of hardware in the same year. The bracelet was his fourth overall, with the other two coming in 2007 – the same year that he won Player of the Year. Looks like history might have a way of repeating itself.

Tom cruised to the final table, and by the time there were four players left he held a commanding 64 percent of chips in play. Schneider then busted Viatcheslav Ortynskiy in fourth place when his A-2 held over Ortynskiy’s K-4.

Accomplished mixed games pro and two-time bracelet winner Greg Mueller busted out in third during a game of 7-Stud. Schneider dealt the finishing blow in exciting fashion, as seventh street gave Mueller a flush and Schneider a full house. It was Mueller’s second third-place finish of this WSOP, good for nearly $130k.

When heads-up play began Schneider held a more than 3:1 chip lead over bracelet winner Benjamin Scholl. Unfortunately the battle of age versus youth didn’t favor Scholl as he was eliminated in relatively quick fashion. On the final hand of the match Schneider held A-T to School’s K-Q. All the money went into the middle on the turn. The board read A-J-6-K, giving both players a pair and a gut-shot straight draw. But it was not meant to be for Scholl, as the river Jack secured Schneider’s second win of the summer.

Schneider mentioned in an interview that he won’t be taking a break to enjoy his victory, and is planning to participate in the $2,500 Razz event that same day. Spoken like a true poker junkie.

Schneider’s efforts were good for $318,955. More importantly, it vaulted him into second place on the POY standings, only 19 points behind WSOP Asia Main Event winner Daniel Negreanu.

If Tom does win POY, it would mark the first time a player has won the title twice. But he’s going to have to fend off some tough competition. Sitting tight in third place is none other than Dan Kelly, who to the surprise of no one, also cashed in the H.O.R.S.E event. It was his unprecedented eighth cash of this year’s WSOP. The model of consistency, Kelly has made two final tables and has finished in the top 20 seven times. Unfortunately for him, he hasn’t finished higher than fifth in any one event. It will be interesting to see how the rest of the summer plays out for this young phenomenon.

But on this day it was the old dogs that persevered, as Tom Schneider proved to the poker world that experience can sometimes triumph over youth.