Ken Lind has won the Seniors No Limit Hold’Em Championship at the WSOP, beating a field of 4,407 to win $634,809 and a WSOP Gold Bracelet. 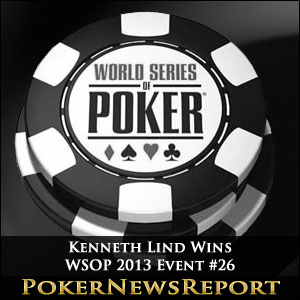 Ken Lind has won the Seniors No Limit Hold’Em Championship at the WSOP, beating a field of 4,407 to win $634,809 and a WSOP Gold Bracelet.

Fernando Halac was the first player to be eliminated from the final table after he was taken out by Lind. Halac, who had 8♥ 5♥, hit a flush draw on the flop, which led to him going all in before the turn. He was called by Lind, who had a pair of Queens with Q♣ 10♣.

Unfortunately for Halac, he did not hit his flush. In fact, Lind cemented his lead even more after the 10♠ came on the turn and the 10♦ came on the river, which gave him a full house to end Halac’s time in the event.

Lind then went on to claim his second successive final table scalp after knocking Jack Ernest Ward from the tournament in eighth place. Ward, who had 3♦ 3♦, went all in before the flop and was called by Lind, who was way out in front with 10♥ 10♦. Lind’s Tens were able to hold on the board which won him the hand while eliminating Ward.

James Miller was knocked out of the final table just three hands later after coming second best in a showdown against Randolph Spain. Miller, who had A♠ 10♠, went all in before the flop and was called by Spain, who showed A♥ K♠.

Miller hit a flush draw on the flop, which briefly put Spain on edge, but the turn and the river respectively showed 5♦ and 8♦. That meant that Spain’s Ace King held up on the board and Miller was out of the event.

Lind got back to his eliminating ways, knocking out his third scalp of the final table after getting rid of Michel Bouskila in sixth spot. After some back and forth pre flop raises and reraises, Bouskila moved all in with A♣ Q♣, which Lind called before he showed Q♦ Q♠.

Despite Bouskila hitting a straight draw on the flop, he did not hit it and Lind’s Queens held on the board to give him the hand and eliminate the Australian from the tournament.

Lind was not done with the knock outs. In fact, he was really just getting started. Five-handed play lasted for around an hour an half before Lind claimed his next final table victim, which ended up being Spain.

This led Spain, who had A♠ Q♦, to move all in. He was called by Lind, who ended up showing K♠ Q♠ for a two pair, which improved to a full house after the K♥ was turned on the river, knocking Spain out of the event in fifth place.

Just five hands later, Lind struck again. This time he eliminated Barry Bashist from the tournament in fourth place, boosting his stack to 7,250,000 in the process. Bashist, who had K♠ 10♠, moved all in on the turn after he hit a Two Pair.

This was no match for Lind, however, who hit a straight on the turn with his A♦ J♥ and promptly called Bashist. The 9♣ on the river did not improve Bashist’s hand and he was knocked out of the event.

John Holley was next player to be eliminated from the event, losing his final hand to Dana Ott en route to getting third place. Both players called the flop, which came 7♠ K♥ 10♠, which gave Holley top pair with his K♦ 5♠ and Ott an open ended straight draw, flush draw and straight flush draw with 8♠ 9♠.

The 6♥ on the turn gave Ott a straight, but it was Holley who moved all in. This was, of course, promptly called by Ott and he won the hand after the 7♥ on the river did not help Holley in any way.

Holley’s elimination left just Ott and Lind in heads-up play, with Lind holding a slight chip lead when play began. Lind chipped up early on, however, and it did not take long for him to have a dominant chip lead over Ott.

Despite Lind’s chip boost, Ott would not go out easily, and it took over three and a half hours for Lind to finally knock him out of the tournament. In the last hand of the tournament, both players checked the flop before the first three cards of the board showed 7♣ 8♣ 10♦.

It was good flop for the soon to be winner, who had a starting hand of J♠ 9♥. Ott, on the other hand, had J♦ 7♠, and thought he was in a good spot when the turn showed 7♥. This led him to reraise Lind all in, which he promptly called before showing his straight.

The K♣ on the river did not impact the hand and Lind was crowned the winner of the event.