Corey Harrison has added his name to the list of WSOP Gold Bracelet holders after he won the $1,500 No Limit Hold’em event (#24) last night. 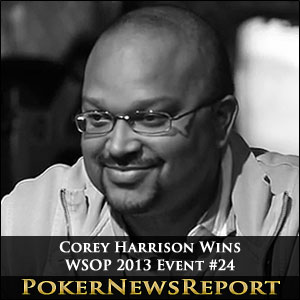 Corey Harrison has added his name to the list of WSOP Gold Bracelet holders after he won the $1,500 No Limit Hold’em event (#24) last night.

The college professor beat a field of 1,731 players to take first place in the three-day tournament and won $432,411 for his stellar play throughout the event. A total of 17 players remained at the start of the third and last day, but that soon dropped to nine and the official final table of the evnt was set.

Robert Brewer was the first player to be eliminated from the final table after he lost a hand to Mohsin Charania. Charania moved all in before the flop with K♠ Q♣ and was called by Brewer, who showed 10♣ 10♠. Charania was able to hit a pair of Queens on the turn, which won him the hand and knocked Brewer out in ninth place.

Charania then went on to claim his second successive final table scalp when he knocked Gareth Teatum out of the event in eighth place. Teatum, who had A♥ 3♣ went all in before the flop, which led Charania to reraise all in with A♦ J♦, causing the rest of the table to fold. Charania’s hand held on the board, despite Teatum getting a flush draw on the turn, and Teatum was eliminated from the tournament.

Two time EPT event winner Zimnan Ziyard was the next to go from the final table. He was knocked out by Salvatore Dicarlo after the Brit was on the wrong side of a pre flop showdown. Ziyard, who had K♣ 10♠ went all in for 510,000 and was called by Dicarlo, who showed 6♥ 6♠.

Unfortunately for Ziyard, he was unable to hit any of the his cards on the board, which meant that Dicarlo’s Sixes were good and Ziyard was eliminated from the event in seventh place.

Charania’s two final table knock outs made it appear as if he was on a roll that could not be stopped, but this proved to be untrue as he lost a showdown to Dicarlo. That loss cut Charania’s stack down considerably, and he was unable to regain the rhythm he had just hours earlier.

It was not long after that hand that Charania moved all in for 605,000 with A♥ 10♦ only to be called by Daniel Cascado, who showed K♣ Q♦. While Charania was ahead before the flop, that soon changed as Cascado flopped a pair of Queens, which won him the hand and sent Charania packing in sixth place.

It was then Harrison’s turn to claim a scalp at the final table, which happened when he eliminated Gregory Josifovski in fifth spot. With a stack of 400,000, Josifovski was short stacked, which may explain why he chose to go all in with Q♦ 7♣.

Harrison, who had 4♦ 4♥, also reraised all in and all other players folded. Josifovski hit an inside straight draw on the turn, but it did not come on the river and he was knocked out of the tournament.

Fourth place went to Paul Spitzberg, who was knocked out of the event by Cascado. After a number of post flop raises and reraises, Spitzberg, who had a pair of Sixes, was all in. He was behind Cascado, who had J♦ J♥, which also stuck on the turn and the river to eliminate Spitzberg and put the event down to three-handed play.

Dicarlo would be the next casualty of the tournament, eliminated in third place at the hands of the eventual winner. After winning and losing a series of showdowns throughout three-handed play, Dicarlo finally met his match when he went up against Harrison once more.

Dicarlo went all in with Q♠ 4♥and was called by Harrison, who had A♠ 6♦. Dicarlo hit an inside straight draw on the 7♦ 6♣ 3♠ flop, but he did not hit it as the turn showed 9♥ and the river showed J♦, which meant Harrison won the hand and Dicarlo was out.

The elimination left Harrison and Dicarlo as the last two players left in the tournament, with Cascado having the chip lead when heads-up play began. Harrison, however, was resilient and he eventually took the chip lead late in the event.

In the last hand of the event, Harrison raised to 250,000 before the flop, which was met by an all in from Cascado. This was called by Harrison before he showed A♠ 7♠. He was ahead of Cascado, who has K♠ 10♣, but Cascado had outs that could have easily put him ahead to keep him in the game.

It was not to be though, with the A♦ J♠ 4♠ giving Harrison top pair as well as a nut flush draw. The 6♦ on the turn and the J♦ on the river did not give Harrison his draw, but it didn’t matter as his Aces were enough to win him the hand and the event.