Athanasios Polychronopoulos has won Event #17 at the WSOP, which was another $1,500 No Limit Hold’em event, good for $322,908 and his second WSOP Gold Bracelet. 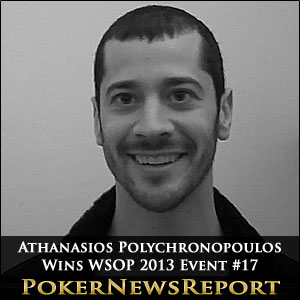 Athanasios Polychronopoulos has won Event #17 at the WSOP, which was another $1,500 No Limit Hold’em event. The New Yorker of Greek descent won $322,908 and his second WSOP Gold Bracelet.

Thomas Nicotera was the first to go from the final table after he was knocked out by Polychronopoulos. The short stacked Nicotera went all in before the flop with A♠ 6♠ which was called and beaten by the Polychronopoulos’ K♦ K♥.

Next to go was David ‘Bakes’ Baker, who was eliminated from the tournament in eighth place. Baker, who had A♦ 4♦, reraised all in before the flop which was called by Everett Carlton, who showed A♠ A♣ which held on the board.

Seventh place in the event went to Joe Ward, who was eliminated by Samuel Taylor. Ward, who was down to his last 290,000 chips, went all in with J♠ 7♦ and was called by Taylor, who had A♣ Q♦. Taylor hit an Ace on the flop, which kept him ahead and eventually won him the hand.

Michael Jurth exited the tournament in sixth after he was eliminated by Manuel Mutke. Jurth went all in with 3♥ 4♥ after getting a flush draw on the flop. Mutke called with Queen high, which amazingly held and won the hand after a Heart came on neither the turn nor the river.

It took only five hands following the dinner break for Samuel Taylor to be eliminated from the event in fifth place. Taylor lost a significant amount of his chips the hand before his last when he lost a showdown to 2009 WSOP Main Event winner Joe Cada.

Taylor then went all in pre flop with King Jack off suit, which was called by Polychronopoulos, who was ahead with Ace Nine off suit. While Taylor has an inside straight draw on the flop, Polychronopoulos hit a Nine, which was enough to win him the hand.

Polychronopoulos then made it two in a row, and his third total final table scalp, when he eliminated Cada in fourth spot. Cada was ahead before the flop, with his A♦ Q♥ outkicking the New Yorker’s A♠ J♥, and looked good after the flop came 8♣ 2♠ 7♦.

However, things changed for the worse for Joe Cada on the turn when the J♠ was shown, putting Polychronopoulos ahead. The 6♣ on the river did not help Cada and the youngest ever WSOP Main Event winner was knocked out of the tournament.

Everett Carlton was Polychronopoulos’ next final table victim as he was the next to be knocked out of the event. After a pre flop raise from Polychronopoulos, Carlton, who had A♦ 6♣, moved all in for 2.45 million chips.

Polychronopoulos called him and showed A♣ J♥, which was ahead after the flop, which showed 3♥ 3♦ 9♣. The Q♦ on the turn and the 5♠ on the river confirmed that his hand was dominant and Carlton was eliminated. Carlton finished the event in third place and earned $224,455 for his efforts.

The New Yorker raised to 250,000 and Mutke responded by three-betting to 650,000. Polychronopoulos, who had Q♦ J♥ then reraised all in and was snap-called by Mutke, who showed A♦ J♦.

The J♣ 5♠ 3♦ flop gave both players a pair, but kept Mutke ahead, as did the 2♣ that came on the turn. Things changed on the river, however, when the Q♣ was shown, which gave Polychronopoulos a two pair and made him the winner of the event.