Rofman has beaten 535 players to take out the WSOP $1,500 Pot Limit Hold’Em event. Rofman won $166K and his first Gold Bracelet for his stellar play. 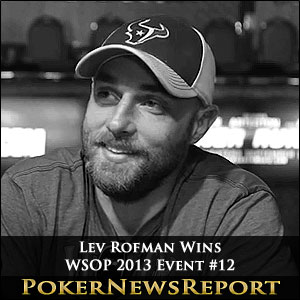 Lev Rofman has beaten a field of 535 players to take out the WSOP $1,500 Pot Limit Hold’Em event. Rofman won $166,136 and his first WSOP Gold Bracelet for his stellar play.

Canadian Jean-Nicolas Fortin was the first player to be eliminated from the final table after losing a hand to Eric Crain. Crain’s A♥ K♣ outkicked the short stack’s A♠ Q♦, and the K♦ on the river put an exclamation mark on the hand, confirming Fortin’s exist from the event.

Tim Reilly was knocked out of the tournament in eighth place at the hands of Jaspal Brar. Down to his last 25,000 chips on that hand, Reilly lost most of his chips in the previous hand to Brar after he ran into Pocket Aces.

Both players’ starting hand were not as strong this time around, but Reilly was still outkicked, as his J♠ 5♣ was behind Brar’s J♥ 9♦. Brar hit top pair on the flop as it came 9♣ 8♣ (3d}, and then two pair when the turn came 3♣. The 9♠ that came on the river gave Brar a full house and he finished the job he started in the previous hand by sending Reilly packing.

Nicolas Halverson was eliminated in seventh spot after he went all in with Q♦ J♦, which was called by Lev Rofman and his A♣ 10♦. Already ahead before the flop, Rofman cemented his lead when he hit a pair of Aces on the flop, which was enough to win the hand and end Halverson’s time in the tournament.

Just three hands later, former final table chip leader Crain was knocked out in sixth place when he was eliminated by Allen Cunningham. Crain had a very solid hand with A♣ Q♣, but he needed a pair if he was going to beat Cunningham’s 5♠ 5♣. That did not happen as all red cards came on the flop, with one of them being 5♦, which gave Cunningham a set.

Rofman struck again to add a second final scalp to his list after he eliminated Anthony Harb from the event in fifth spot. Harb went all in before the flop with K♣ J♠, which was called by Rofman, who had A♠ A♥. While Harb hit a pair of Kings on the flop, he was not able to get any more help neither on the turn nor on the river, and he was knocked out of the tournament with $38,055 for his efforts.

Jaspel Brar was not one to be undone; he claimed a second scalp of his own when he knocked Kenneth Shelton out in third place. Brar, who had Q♦ 9♥, hit a pair of Queens on the flop while Shelton flopped a pair of Jacks with K♣ J♠.

This prompted both players to go about a post flop raising battle before Shelton was all in. The A♠ on the turn and the 2♥ on the river was of no help to him and he was eliminated from the event.

Brar himself became a scalp on the next hand when he was eliminated by Cunningham in third place.
After some raising and reraising before the flop, the flop came K♥ 10♥ 8♣, which gave Cunningham a two pair with his K♦ 10♣. Brar’s A♣ A♦ was beaten and he was knocked out after Cunningham called his all in after the flop.

This left Cunningham and Rofman in heads-up play, and while Cunningham was ahead by over one million chips when play began, Rofman was in no mood to settle for second best. It appeared Cunningham was going to get the best of Rofman, however, the five-time WSOP Gold Bracelet winner had him down to 280,000 at one point.

Rofman clawed back though, and he eventually took the chip lead from Cunningham en route to eliminating him and taking out the tournament. In the last hand of the event, Rofman, who had K♦ Q♠, raised to 120,000, which was called by Cunningham and his K♠ 8♣.

Cunningham went all in after the all-spades flop and Rofman called. The 7♣ on the turn and the Q♥ on the river did not give Cunningham the flush he wanted, and Rofman was crowned the winner of the tournament after a magnificent heads-up comeback.