The first day of the WSOP 2013 is over and event #1 and #2 have gotten under way. More than half of the players were eliminated from Event #2 on the first day. 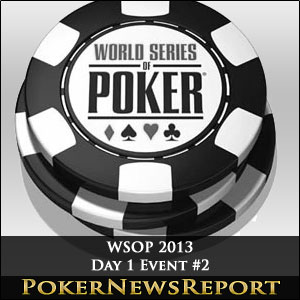 The first day of the WSOP 2013 is over and event #1 and #2 have gotten under way. More than half of the players were eliminated from Event #2 on the first day.

The biggest event of the two is Event #2, which is a $5,000 No Limit Hold’Em/Eight Handed tournament. Featuring a rafter a huge names such as Antonio Esfandiari, Nam Le, Daniel Negreanu, Phil Hellmuth and Bryan Piccioli, the event has a total prizepool of $2,260,700 up for grabs.

A total of 232 players made it through to the second day of the four-day long tournament, which is less than half of the 481 players who participated in the event on the first day.

Tom Marchese ended the first day with the chip lead, with a stack of 153,975 to his name. Marchese boosted his stack by around 30,000 right before the end of the first day after eliminating a player from the event. The eliminated player moved all in pre-flop with Nine of Clubs and Five of Diamonds, which was immediately called by Marchese, who had Pocket Queens.

The board ran out King of Diamonds, Queen of Diamonds, Five of Hearts, Three of Clubs and Jack of Diamonds, which meant Marchese’s Queens held out and he consolidated his lead at the top of the chip ladder.

Pocket Queens did not serve so well for 2013 Manila Millions winner and WSOP regular Joseph Cheong, who was also knocked out in the later part of Day 1. Cheong’s Queens were ahead of his opponents Seven Eight of Hearts pre flop, but that all changed after the flop when his opponent picked up a flush draw, a straight draw and a straight flush draw. A Jack of Spades came on the turn which ended Cheong’s play in the event and gave him a not so good start to the 44th annual WSOP.

WSOP Asia Pacific Main Event winner Daniel Negreanu was unexpectedly knocked out very early in the tournament, being knocked out in Level 2. Negreanu lost the majority of his poker chips in a massive pot which left him with a stack of just 900 chips, which he lost soon after when he was unable to double up his stack.

Marchese is one of just three players who currently have a stack of over 100,000 chips. Scott Baumstein is second on the chip ladder with 111,100 chips to his name, which is only slightly more than David ‘Doc’ Sands, who has a stack of 110,825 chips.

Stephen Bokor is not far of the six-figure mark with a chip stack of 95,000. Bokor was able to put himself in a prime position for Day 2 after knocking out Terrence Chan about half an hour before the end of the first day of play. Chan’s elimination boosted Bokor’s stack by about 16,000 chips, which elevating him up the chip ladder.

Day 1 of the two-day long $500 Casino Employees No Limit Hold’Em WSOP Event #2 also took place on the first day of this year’s WSOP. Michael Trivett ended the day as the chip leader of that event with a stack of 133,900.

Day 2 of action at the 2013 WSOP gets underway tomorrow afternoon at the Rio Las Vegas.