Russian Viacheslav Zhukov appears to be a man of few words – certainly in English anyway – as he collected $465,216 and a gold bracelet for winning event No.11, the $10,000 Omaha hi-low split-8 or better championship, at the World Series of Poker (WSOP) in Las Vegas last night. 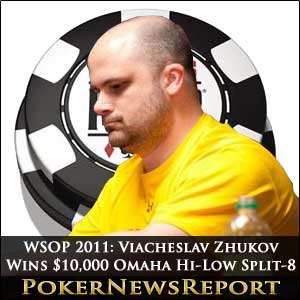 Russian Viacheslav Zhukov appears to be a man of few words – certainly in English anyway – as he collected $465,216 and a gold bracelet for winning event No.11, the $10,000 Omaha hi-low split-8 or better championship, at the World Series of Poker (WSOP) in Las Vegas last night.

Zhukov saw off American George Lind in heads-up action, took his gold bracelet out of its box, lifted it into the air – as photographers jockeyed for position – and then declared: “I’m exhausted.”

That was it for Zhukov’s foray into the English language yesterday, but probably told the story of a gruelling four days – of a three-day event – that witnessed the Russian outlast 201 other competitors to become the last man standing.

The last day at the Rio All-Suite Hotel & Casino began with just three entrants fighting for the title and American Steve Billirakis the short stack with little more than three big blinds.

The Las Vegas pro wasn’t around for long, however, before he was out in third place for a prize of $214,697.

On the big blind, Billirakis was all-in for 75,000, while Zhukov limped in from the button and Lind was happy to take a cheap flop from the small blind.

The board showed 8s-5d-Qs-Jh-Kd with Lind and Zhukov checking it down. Finally, though, Zhukov bet the river and Lind folded. Billirakis showed Ac-6d-8d-Jd for two pair – eights and jacks – but that wasn’t good enough as Zhukov revealed Ks-Kc-Qd-4c to show trip kings.

It was now heads-up action. But any thoughts that this would be over quickly were misplaced as a three-hour battle ensued as the blinds continued to grow and pots followed the same route.

Both players enjoyed highs and lows over the battle, but it was all over during the 32nd level, although, with only 12 big bets in play, it was a slightly earlier hand that left Lind way behind the Russian.

The board read 5s-Kh-10c-9d-Jd. Lind had check-called Zhukov’s flop bet, then led out on the turn and river. But then Zhukov raised it up to one million and Lind folded to leave him with only 1.4 million of the six million chips in play.

Just over 10 minutes later, it was all over. On the button, Lind opened and Zhukov placed two bets in for Lind to make the call. The dealer put down 4d-Kh-Qs, Zhukov led out and Lind raised, only for Zhukov to re-raise all-in. Lind called.

Zhukov showed Ac-Jh-7h-3s, while Lind held 9h-8s-6h-4s to amazingly have the lead with two fours, although there were numerous cards out there to help Zhukov.

As the tension grew, the rail gathered closer, and one of Zhukov’s supporters called out: “Ten of diamonds!”

The turn was the 5h and, although still behind, Zhukov did have flush and straight draws, with any heart or deuce giving him the title-winning hand.

The rail fell strangely quiet just before the dealer placed the 2d on the table. Zhukov jumped up from his seat to finally display some emotion as he celebrated with his supporters. Lind waited patiently to shake Zhukov by the hand before heading off to pick up his $287,444 prize as runner-up.

That was Zhukov’s second career cash after winning a European Poker Tour (EPT) side event, but last night he became the first Russian to lift a gold bracelet at this year’s WSOP – not that he seemed capable of truly enjoying his success…yet.