Sean Getzwiller felt amazing as he emerged victorious from a final-day battle to lift the World Series of Poker (WSOP) $1,000 No-Limit Hold’em event #8. 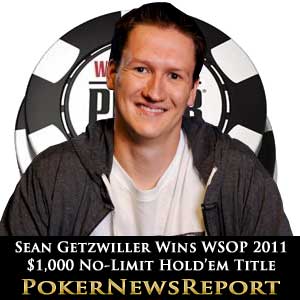 The Las Vegas pro held off Sadan Turker and Jon ‘PearlJammer’ Turner – as well as 4,175 other players – over four days’ play to collect the gold bracelet and $611,185 with his mixture of aggression, brave calls and good timing.

Getzwiller was, of course, “very, very happy with the result”, but did admit that “with a 4,000-man field, you have to get lucky a few times.”

However, the cool one-year pro played a brilliant event at the Rio All Suite Hotel & Casino, but again confessed that he believes “if you’re going to win a tournament, you’re going to have to win a lot of races.”

That is exactly what he did. But he was correct in his assessment of his tournament when saying that “I played well all throughout”, while admitting that “the final table was pretty tough”.

Getzwiller was also impressed by the standard of play, even with so many amateurs registered to create a massive field, saying that “there were so many good, solid players” involved.

The tournament began with two day one starts and a prize pool of $3,760,200, but it was Getzwiller who left the happiest of the huge field as he registered his ninth WSOP cash finish.

In what was a see-saw heads-up battle, Getzwiller and British player Turker swapped places as the big and short stacks – and it seemed almost unavoidable that the final hand would come down to a coin flip.

Getzwiller was ahead on chips and had a slight hand advantage as both rails began shouting for various cards, such as an ace, five or nine.

The flop came Jd-5c-4d to give Getzwiller trips and leave Turker with just runner-runner for outs. An overjoyed Getzwiller leapt into the air, then quickly regained his composure as he recalled that poker can be cruel.

Returning to his seat, Getzwiller prepared for the worst. However, as Turker needed a two or three to have any hope that their near-six-hour war of attrition would continue, the dealer placed the 8c on the turn to end the match and his chances of becoming the third Briton in just a matter of days to lift a gold bracelet.

A worthless Kh came the river and, as Turker left his seat, the Las Vegas-based Getzwiller – who had been celebrating with his supporters – met his opponent to congratulate him on a wonderful tournament that saw the Brit leave with $377,411.

Getzwiller, who lives in California, could hardly believe he had finally won a WSOP title as he had “been wanting this bracelet for so long – and it just feels amazing”.

However, the new champion was surprised at how long the heads-up battle lasted, saying “it was such a grind” as he and Turker “traded the chip lead 12 or 13 times”.

In fact, “even with the last hand, if he doubled-up he would have had the chip lead again and we would have been back at it”.

Turner, meanwhile, had been eliminated hours earlier, when – as the short stack – he called Turker’s all-in bet, much to the surprise of the British player.

Turner held 8h-8s and Turker Qs-4d, leaving the former in a great position to double up. He just needed to see a helpful board.

The flop came Ad-2c-Jc, leaving just three queens in the pack to avoid elimination. However, the turn was Qc, prompting Turner to stand up and begin gathering his belongings as he knew only two eights were left to make his hand a winner.

The river came 9d to send Turner out in third and without his first WSOP bracelet – although he did pick up a handy sum of $274,005.