Ukrainian poker pro Oleksii Kovalchuk also lifted his first WSOP title on Friday as he beat out the challenge of Romanian engineer Ionel Anton in heads-up play to win the $2,500 buy-in six-handed no-limit hold’em title, a bracelet and a $689,739. 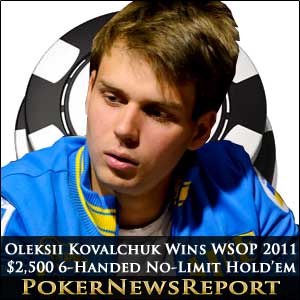 Ukrainian poker pro Oleksii Kovalchuk also lifted his first WSOP title on Friday as he beat out the challenge of Romanian engineer Ionel Anton in heads-up play to win the $2,500 buy-in six-handed no-limit hold’em title, a bracelet and a $689,739.

After three days’ play in the Amazon Room, Kovalchuk – who saw off 1,377 other players – is now the second Ukrainian to win a WSOP gold bracelet, following on from Eugene Katchalov’s success in the $10,000 seven-card stud event just two weeks ago, while Anton secured the best-placed finish for a Romanian in WSOP history.

Day Three started with 22 players, but Sam Grafton and Will Failla fell just short of the final table, while Chris Moorman was eliminated in third when Kovalchuk’s straight draw arrived on the river.

Anthony Ruberto was first to go at the final table when he suffered a huge bad beat that demolished his stack. He was all-in on the turn in a pot with Kovalchuk and showed a set of jacks to be met by the Kiev native’s set of fours. Then Ukrainian spiked his one-outer on the river to make quad fours – and Ruberto was out soon after.

Dan O’Brien was knocked out in fourth after he paired a king on the flop, only for Kovalchuk to make a flush on the turn, while Mazin Khoury was eliminated in fifth when his As-Qd ran into Ionel Anton’s aces.

The start of heads-up play saw Anton and Kovalchuk swap the chip lead several times as play became fast and loose, before the latter opened up a chip lead that he never surrendered.

The final hand saw Kovalchuk raise to 150,000 on the button and Anton move all-in for about 1.5 million. Kovalchuk called immediately to flip over 7c-7h, while Anton showed Ac-6s.

The flop came 9s-5h-7d to give Kovalchuk trip sevens, although it also gave Anton an inside straight draw.

But the turn came 10h and the river 10d to see Kovalchuk fist-pump the air as he took the bracelet with his full house.