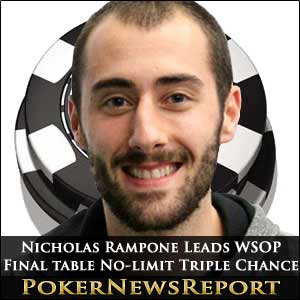 American Nicholas Rampone leads the final table of 10 at the conclusion of day two of the $1,500 No-Limit Hold’em Triple Chance event as another 146 players fell from the original entry of 1,340 at the World Series of Poker (WSOP) of 2011 in Las Vegas.

Also moving on to day three are Americans David Diaz, Matthew Henson and Corey Hastings, as well as Britain’s Richard Trigg and Steven Watts – as all 10 players chase the $352,808 winner’s cheque from a $1,809,000 prize pool.

American Jerry Wong was the unfortunate bubble boy, finishing in 145th place. Wong was so unlucky, though, as his pocket aces were beaten by Justin Chan’s Kh-Qs.

Hong Kong’s Chan found the king he needed on the flop and then paired his queen on the turn to send Wong to the rail. Chan, however, was knocked out in 48th place for a $6,331 cash.