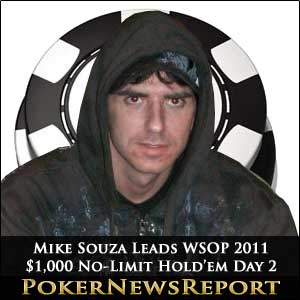 In what was an action-packed second day in the Amazon Room, the 323 first-day survivors have now been cut down to just 27 as they chase the $488,283 top prize. We reached the money on Sunday night as the top 324 players are paid, with $1,895 going to players eliminated all the way up to 280th place.

Souza – who is experienced at this level, having cashed in 11 WSOP events as well as 18 WSOP Circuit events, including three victories – will undoubtedly start at favourite this evening to pick up his first WSOP bracelet.

But other big-name pros survived as Souza and Verspui were joined by Los Angeles-based pro Jeremy Kottler in third on 579,000 chips, while the Czech Republic’s Paulus Valkenburg is fourth on 552,000 and Australian Justin Cohen sits in fifth on 524,000.