Gus Hansen was the final player to make it into the last eight of the $25,000 Heads-Up No Limit Hold’em Championship at the World Series of Poker (WSOP) in Las Vegas late last night after dispatching Tom Dwan. 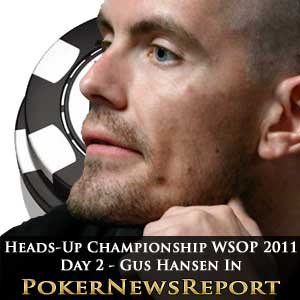 Gus Hansen was the final player to make it into the last eight of the $25,000 Heads-Up No Limit Hold’em Championship at the World Series of Poker (WSOP) in Las Vegas late last night after dispatching Tom Dwan.

There were 32 players back for day two of the new event at the Rio All-Suite Hotel & Casino, but 24 were sent to the rail during more than nine hours’ play yesterday as the competitors battled to make the Elite Eight.

Denmark’s Hansen now faces Matt Marafioti after the Canadian had earlier overcome Steve Billirakis when his Ad-Jd saw off up the American’s 8d-8c. With Billirakis all-in, the board showed Kd-4d-3h-5c-2s to hand Marafioti a straight.

Hansen, meanwhile, secured his quarter-final spot when seeing off New Jersey pro Tom Dwan in a match that provided much excitement as the chip lead changed hands several times.

The final hand arrived – much to the disappointment of the many fans gathered to enjoy this almighty battle – after Hansen, on the button, had opened to 220,000.

Dwan sighed loudly, but then announced he was all-in for about 320,000 in total. Hansen paused, but called with his Ks-9s. The American showed Qh-10h, but failed to improve when the board came 9c-Ac-4d-Ad-6d to give Hansen aces and nines.

Hansen had earlier defeated some big-name players in Jason Mercier, Greg Brooks and Daniel Alaei, although he can expect the competition to get even tougher during the final two days.

However, he is facing a tough task. Not only does he have to get past Matt Marafioti, the Elite Eight comprises quality in abundance, with Jake Cody – the World Poker Tour London Poker Classic champion – joined by Anthony Guetti, David Paredes, Eric Froehlich, Yevgeniy Timoshenko and Nikolay Evdakov.

Evdakov was, in fact, the first to make the last eight after he defeated fellow Russian Mikhail Smirnov.

Meanwhile, Dwan collected $67,436 for his defeat in the last 16, as did the likes of Billirakis, Richard Lyndaker, John Duthie, Jonathan Jaffe and Olivier Busquet.

The Elite Eight match-ups are: