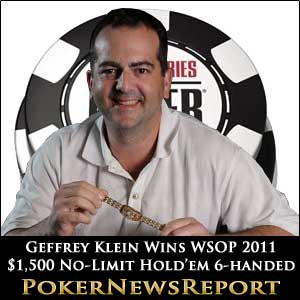 The Houston native beat out 1,919 other players to collect the first prize of $544,388 with his very first WSOP cash finish when defeating Eddie Blumenthal, from Wisconsin, in a heads-up battle that left the runner-up with the consolation of a cheque for $334,756.

The final day’s play started with 15 players still in contention, but came to a conclusion when Klein defeated short stack Blumenthal – who had already registered a fourth place and $255,028 from event No.4, the $5,000 no-limit hold’em championship.

Blumenthal was well in command when it came to heads-up as he had possession of the vast majority of chips to leave Klein with only 775,000.

However, Klein fought back with a few double-ups to eventually move ahead of his opponent. Thereafter, he applied steady pressure on Blumenthal while practically winning every key pot.

With the clock counting down to the last 20 minutes of play for the day, the final hand arrived as all the chips hit the table pre-flop.

On the button, Blumenthal raised to 250,000, only for Klein to quickly re-raise with his Ad-Ks. Blumenthal then snap-shoved to show 7s-7d.

An excited audience crowded round the rail in anticipation of the flop, which showed 8d-5d-5h. With neither hand improved, Blumenthal was then disgusted to see the Kd on the turn to give Klein the high pair and a nut flush draw.

With just two outs at Blumenthal’s disposal, he came close to losing it when the Qd showed on the river, shouting: “How can he beat me in that many all-ins, Jesus Christ!”

Blumenthal’s friends attempted to calm him down, but he stormed off in a particularly unsportsmanlike manner.