A third bracelet was awarded on Friday as 35-year-old American Chris ‘PiMaster’ Viox lifted his first when coming out on top in the $1,500 buy-in seven-card stud hi-low split 8 or better championship by outlasting 605 other competitors over four days. 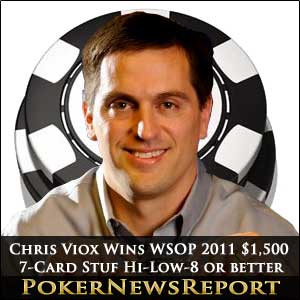 A third bracelet was awarded on Friday as 35-year-old American Chris ‘PiMaster’ Viox lifted his first when coming out on top in the $1,500 buy-in seven-card stud hi-low split 8 or better championship by outlasting 605 other competitors over four days.

There were more than a few interesting competitors and personalities on show as 49th-place finisher Artie Cobb, who has four WSOP bracelets from seven-card stud variants, had won the same event back in 1976 – the first year it had been included on the WSOP calendar.

Interestingly, the 35-year break between Cobb’s first cash in this event and this most recent represents the longest time between cashes in WSOP history.

Two well-known TV personalities were still in with a chance of victory as day three progressed, but ESPN’s Norman Chad – the co-host of most WSOP coverage – crashed out in 12th, while WPT commentator Mike Sexton fell just short in heads-up play against Viox.

However, this runners-up finish saw the former WSOP gold bracelet winner, Tournament of Champions winner, and 2009 Poker Hall of Fame inductee break through the $1 million barrier in career WSOP winnings with his cash.

It took just under an hour for Viox to finish off Sexton on day four, although they had actually reached their heads-up battle the day before, only to be halted as the hard-stop rule came into play.

Sexton was way down on chips as they restarted, and was whittled very quickly down even further to just 240,000 chips at one point.

However, Viox – a married father of two young kids from Houston, Texas – couldn’t finish the battle off as Sexton rivered two pair to double-up. He doubled-up once more to move to almost one million chips a few hands later.

But that was as close as he got as only a few hands later, Viox – who now lives in Glen Carbon, Illinois – rivered two pair to crush Sexton’s response.