Day 3 of the Mixed Max WSOP 2014 Event #2 was played down to its heads-up conclusion, where Vanessa Selbst and Jason Mo will fight it out for the bracelet. 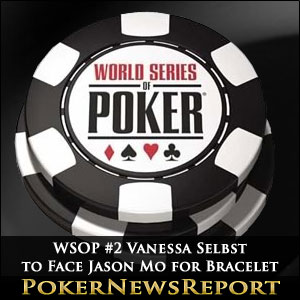 Day 3 of the Mixed Max WSOP 2014 Event #2 was played down to its heads-up conclusion, where Vanessa Selbst and Jason Mo will fight it out for the bracelet.

It is not often that a WSOP event is ahead of schedule, but that is exactly what happened last night in the Mixed Max Event #2. The event was initially due to be played in a four-max format until just four players remained who would contest the heads-up semi-finals late today; but the pace of eliminations was so fast that there was time to fit in both semi-finals and find out who would be playing heads-up for the $871,148 first prize and WSOP bracelet.

Ultimately, Vanessa Selbst and Jason Mo emerged as the two players who would tough it out in the climax of the event, but at various stages throughout the day, that combination seemed the most unlikeliest to occur.

Four Max Over within Four Levels

The penultimate day of the Mixed Max Event started with sixteen players – each assured of a $54,945 min-cash – distributed over four 4-handed tables; but whereas it is often the case, once the money bubble bursts, that short-stacked players abandon their usual opening hand selections and adopt a shove-or-fold policy, many of the players who hit the rail during the early action can consider themselves unfortunate.

Noah Schwartz was the first player to be eliminated, having the best hand in the pre and post flop action, but falling Q♠ 2♠ > A♥ 4♣ to Vanessa Selbst´s rivered flush. Barry Hutter also fell to a rivered flush, this time Q♦ J♦ > K♥ K♣ against Al Decarolis, while Kevin Song´s 2♣ 2♥ were counterfeited by two pairs on the board and he fell to Robert Tepper´s superior kicker.

The hard-luck stories continued as Richard Lyndaker completed his straight draw on the River, only for it to be bested by Ryan Fee´s rivered flush, and Darren Elias (A♣ 7♦) got the last of his chips in with a flopped top pair top kicker, only for Al Decarolis (9♠ 2♠) to turn Trip Deuces.

Despite Vanessa Selbst seemingly enjoying the best of luck at the tables, her chip stack started to go into freefall as both Al Decarolis and JC Tran forced her off of substantial pots. For over a level Selbst clung on to her chips as she and Matt Giannetti were the two most likely candidates to be bust before the semi-final stage on the Mixed Max Event. Ultimately it was Giannetti who fell in fifth place – moving all-in pre-flop with A♥ 5♥ and failing to improve past Decarolis´ A♣ 10♥.

The format of the tournament now changed, and the player with the biggest chip stack would play the shortest-stack player heads up, while those in second and third place would tough it out for a place in the final. Consequently the heads-up pairing looked like this:

Taking a near seven-to-one chip advantage into his heads-up match against Vanessa Selbst, Al Decarolis was a strong favourite to progress to the final; but Selbst had different ideas, and she doubled up in the first hand Q♦ 2♥ > 10♠ 5♠ to significantly reduce the deficit.

Uncontested victories in five straight hands as the blinds rose to 25,000/50,000 (ante 5,000) enabled Selbst to make further inroads into Decarolis´ stack, and the two played fairly small-ball poker over the next couple of levels until Selbst eventually drew level on chips.

Decarolis was growing visibly tired as the heads-up duel continued, and several uncontested shoves by Selbst enabled her to move into a 2:1 chip advantage. Eventually Al Decarolis cracked, and when Vanessa Selbst (9♥ 8♥) moved all-in after the flop of 4♦ 9♠ 7♥, Decarolis made the call with just A♣ K♥.

Neither of Decarolis´ overcards appeared on the Turn or River, and Vanessa Selbst had remarkably overcome a massive chip deficit to be in with a chance of collecting her third WSOP bracelet.

The second semi-final was played simultaneously as the Decarolis -v- Selbst encounter, and was over much quicker despite the two players being stacked more closely.

The early encounters saw JC Tran slightly extend his advantage and open up a 1.3 million chip lead over Jason Mo, but Mo doubled up into the lead and crippled Tran when his A♣ K♦ paired on the flop to best Tran´s 10♦ 10♣.

Jason Mo nearly wrapped up the contest within 30 hands when ahead after the flop of 8♦ 10♣ 5♠ in an A♦ 10♣ -v- A♣ J♣ encounter against Tran, but Tran hit a runner-runner straight to double back up.

However, four hands later the second semi-final was over – Jason Mo shoved from the button with J♥ 10♠ and JC Tran called with the dominant A♦ Q♦. The flop of 2♣ 3♦ J♠ put Mo ahead in the hand, but Tran could still survive if one of his overcards connected with the board. The board completed 7♠ / 2♠ and Simon Mo had also come from behind to claim a place in tomorrow´s heads-up climax.