Al Decarolis is the chip leader in the Mixed Max WSOP Event #2 at the close of Day 2, and leads the 16 remaining players into the 4-max stage of the tournament. 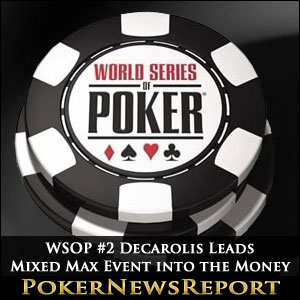 Al Decarolis is the chip leader in the Mixed Max WSOP Event #2 at the close of Day 2, and leads the 16 remaining players into the 4-max stage of the tournament.

Day 2 of the Mixed Max WSOP Event #2 saw sixty players returning to the Amazon Room at the Rio All-Suites Hotel and Casino for the 6-Max stage of the tournament. The aim of the day was to survive until only sixteen players remained, who would each be assured of a $54,945 min-cash.

Plenty of big “names” were still in contention for the first open bracelet of the 2014 World Series of Poker when play began; but, after six levels of action, local restaurateur Al Decarolis heads the chip counts in pursuit of the $871,148 first prize.

The two chip leaders going into the second day were Vanessa Selbst and Brian Rast, but both got off to poor starts – Selbst twice shipping significant quantities of chips to her table companion Phil Hellmuth, while Rast doubled up Kevin Eyster A♥ K♠ > A♣ 4♣ in one of the first hands of the day.

Among other players who did not enjoy a good start were Daniel Negreanu – bust in a flip with pocket Jacks by Kevin Song´s Ace-King – and end-of-night chip leader Al Decarolis, who was reduced to his last 25,000 chips when his A♣ A♦ was cracked by Ashton Griffin´s trip Jacks.

Decarolis and Selbst Bounce Back

A double-up against Vanessa Selbst 10♣ 10♥ > A♠ 10♠ enabled Decarolis to remain competitive, and he then benefitted from trip Jacks when cracking Tony Gregg´s pocket Aces to eliminate the 2013 One Drop High Roller Champion and finish the day with 1,261,000 chips.

Vanessa Selbst also recovered from her poor start and bust Dan Cates out of the event when her K♥ 9♠ caught the K♦ on the Turn, before spiking the A♦ to eliminate Ashton Griffin A♥ Q♣ > K♦ K♠ and move up to third place overnight with 1,224,000 chips.

Either side of Vanessa Selbst on the Mixed Max leaderboard are JC Tran and Jason Mo who both enjoyed productive days – Tran accounting for Phil Ivey with a flopped flush against Ivey´s flopped Ace-high straight, and Mo crippling Brian Rast A♠ Q♣ > 10♥ 10♦ when the board produced two pairs – Jacks and Kings – and Rast´s pocket Tens were counterfeited.

John Juanda may have the nickname of “Luckbox”, but his luck deserted him in the final hand of Day 2, when he moved all-in from the small-blind with Q♥ 6♥ and ran into Robert Tepper´s A♠ Q♦. Tepper´s hand improved into a Broadway straight on the Turn, and Juanda was eliminated in seventeenth place.

Looking ahead to Day 3 of the Mixed Max WSOP #2, the sixteen remaining players will be divided into four tables of four, with the four players who survive the 4-Max stage competing in a heads-up KO on Friday for the bracelet. An interesting seating draw places Vanessa Selbst to the left of JC Tran on Table 354, while chip leader Al Decarolis will be up against Barry Hutter, Matt Gianetti and Ryan Fee.