Vanessa Selbst has a healthy chip advantage at the close of Day 1 of the WSOP Mixed Max NLHE Event after eliminating Jake Schindler with flopped Quad Jacks. 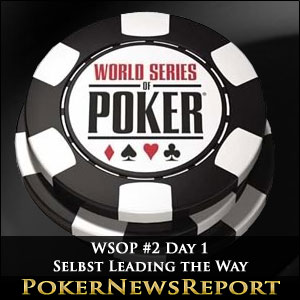 Vanessa Selbst has a healthy chip advantage at the close of Day 1 of the WSOP Mixed Max NLHE Event after eliminating Jake Schindler with flopped Quad Jacks.

The second event in the 2014 World Series of Poker is one of the most eagerly anticipated. The $25,000 buy-in Mixed Max NLHE Event has the third biggest buy-in of the 65 events in this year´s Series – after the Big One for One Drop and Poker Players Championship – and consequently attracts some of the most successful players in the world.

The format of the event is that it is played nine-handed on Day 1, six-handed on Day 2, four-handed on Day 3, and then heads-up on Day 4. The winner of the event will be the player who can master each of the four disciplines and, after 131 players dug deep into their bankrolls to enter the tournament, will also be $871,148 richer.

Ten one-hour levels were played during Day 1 of WSOP #2, during which time a plethora of stars entered the Mixed Max NLHE Event – and left again. Marvin Rettenmaier was among the early casualties after running into Ryan Fee´s A♦ A♣, while Paul Volpe was also eliminated after moving all-in with A♣ K♣ and failing to crack Jeff Gross´ A♠ A♦.

Al Decoris was the first player through the 300,000 chip barrier (players started with 75,000 chips), but he fell back into midfield after doubling up Mickey Petersen Q♠ J♣ > J♠ 10♥ and Doug Polk A♥ Q♦ > K♦ Q♣, and Brian Rast took over at the top of the leaderboard when eliminating 2012 WSOP Main Event Champion Greg Merson and Phil Galfond in quick succession.

What Goes Up Must Come Down

A number of players flattered to deceive before being eliminated from the Mixed Max NLHE Event – no more so than Jennifer Tilly. Tilly had got off to a strong start when eliminating Ryan D´Angelo in an Aces > Kings hand, but was bust shortly after doubling up Vanessa Selbst 10♥ 10♠ > K♠ J♠.

Josh Arieh also got off to a good start, but ran into Phil Ivey´s trip Sixes before being bust at the end of Level 8 by Alec Torelli A♥ A♠ > K♣ K♠, while Jason Koon – who had chipped up nicely during the early levels against Daniel Negreanu – lost the lot to 888Poker´s JC Tran in a Q♥ Q♦ > A♣ K♠ confrontation.

Other notable hands that may have an impact on the destination of the first open WSOP bracelet included Phil Hellmuth´s flopped set of Eights enabling him to double up against John Juanda, Justin Bonomo´s rivered Straight cracking Al Decarolis´ pocket Aces and Jason Mercier doubling up with A♠ K♦ against Barry Hutter´s 9♣ 9♥ just before the close of play.