Vanessa Selbst became only the second female player in the history of the World Series of Poker to win three WSOP bracelets when taking the Mixed Max Event #2. 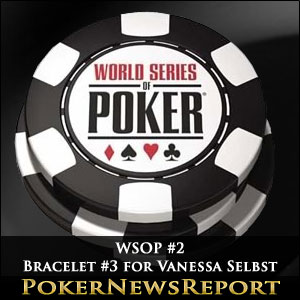 Vanessa Selbst became only the second female player in the history of the World Series of Poker to win three WSOP bracelets when taking the Mixed Max Event #2.

Due to the quick conclusion of the 4-Max action on Day 3, the heads-up semi-finals were played on Thursday night; and they resulted in Jason Mo carrying forward a 5,860,000 -v- 3,960,000 chip advantage against Vanessa Selbst into the climax of the event, after both players had over-turned chip deficits in their respective semi-finals.

Level 27 saw Jason Mo move a considerable step closer to winning his first WSOP title after forcing Vanessa Selbst off of three valuable pots within eight hands to build a 5-to-1 chip advantage; but then a massive swing occurred in the conclusion to WSOP 2014 Event #2.

At the end of the Level, Vanessa Selbst used the twenty minute break to review the hands in which she had lost a sizeable quantity of her chips, and came back all guns firing to double up in the fifth hand of Level 28 J♠ 10♠ > 5♦ 3♦. Then victory in another big pot in which Selbst was the aggressor following the flop of K♠ Q♠ K♥ saw the chip stacks returned to where they were at the start of play.

Mo managed one double up – 10♦ 5♦ > K♥ 8♦ with a paired Five – but the momentum was definitely with Vanessa Selbst, and she used her chip advantage to good effect – forcing Jason Mo off of a couple more substantial pots to reduce her opponent to 2.535 million chips.

The last of Mo´s chips went in pre-flop with 9♦ 7♦, and Vanessa Selbst was more than happy to make the call with K♥ J♣. The flop of 10♣ A♠ 2♣ gave Mo nothing, and Vanessa Selbst had one hand on the bracelet following the Turn A♦. The J♣ sealed her victory in the Mixed Max Event – enabling her to lock up the $871,147 top prize and her third career WSOP bracelet.

Selbst´s victory took her lifetime live poker winnings to over $10 million, and her bracelet in this event is the first she has won playing NL Hold´em – the previous two came in PL Omaha (2008) and 10 Game Mix (2012). Her achievement of winning three WSOP bracelets is all the more remarkable because all three have been won in “open” events, whereas two of Barbara Enright´s trio of bracelets were won in Ladies-only Events.