WSOP #1 Wrapped Up by Reparejo in Six Hands

The conclusion to the Casino Employees Event – Event #1 of the 2014 World Series of Poker – was settled within ten minutes of the heads-up climax resuming. 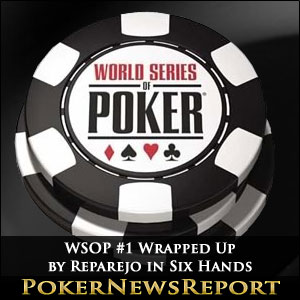 The conclusion to the Casino Employees Event – Event #1 of the 2014 World Series of Poker – was settled within ten minutes of the heads-up climax resuming.

The decision to call a halt to Day 2 of the opening event of the 2014 WSOP when the statutory eleven-limit had been reached on Wednesday was considered to be controversial by those watching the proceedings from the rail in the Amazon Room of the Rio All-Suites Hotel and Casino.

Roland Reparejo had just taken the chip advantage with a dramatic rivered set of Sixes over Corey Emery´s paired King; and although Emery was keen to battle on until a winner was determined, Reparejo said he was tired and quite happy to abide by the tournament rules.

Reparejo had certainly benefitted from his rest, taking the first four pots to extend his lead over Emery, who tried to stamp his authority on the game by shoving all-in in hand five to collect the blinds and antes. However, Emery´s authority would be wiped out altogether in the sixth hand of the day, which happened in a flash.

Lesson 1: How to Trap an Emery

Roland Reparejo limped into hand six, and Corey Emery – possibly still trying to stamp his authority on the game – immediately moved all-in. Reparejo snap-called and the cards were on their backs:

Reparejo was a 63% favourite to win the hand before the flop of 2♣ 8♠ A♥ was dealt, and a 79% favourite afterwards. Emery still had plenty of outs though and after the Turn of 10♣, could still have won the hand with any Jack or any Eight.

Unfortunately for Emery, his deep run in the Casino Employees event came to a finish when the 2♥ was dealt on the River, and Roland Reparejo became the first bracelet winner of the 2014 World Series of Poker.

876 players ponied up the $500 buy-in for the opening event of the 2014 WSOP, creating a prize pool of $394,200, which was shared between the top ninety players. Those who cashed in the event after the money bubble burst late on Day 1 collected a min cash of $886, while those who progressed to yesterday´s final table were rewarded with the following amounts: