WSOP #1 Goes into Third Day with Reparejo in Charge

The opening event of the 2014 WSOP has had to be extended into a third day after time ran out to conclude the tournament within the allotted two days. 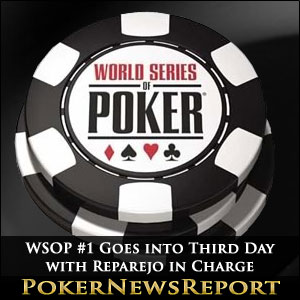 The opening event of the 2014 WSOP has had to be extended into a third day after time ran out to conclude the tournament within the allotted two days.

With the money bubble having burst on the opening day of WSOP Event #1 – the Casino Employees NLHE event – 51 players returned to the Brasilia Room at the Rio All-Suites Hotel and Casino with the hope of laddering up the payout structure and being in with a chance of the $82,835 first prize and the first bracelet of WSOP 2014.

After eleven levels of play, the tournament was concluded for the evening with Roland Reparejo and Corey Emery duelling in an intense heads-up battle – although it could have been so different had Reparejo not spiked a dramatic two-outer in the last hand of the night.

Corey Emery had come into Day 2 of the Casino Employees NLHE event with a substantial chip lead after hitting a turned straight in the last hand of Day 1s action, but throughout the early levels he was practically anonymous and he allowed a number of players to catch up with him.

John Taylor and David Luttbeg also took their turns at the top of the leaderboard, but it was Corey Emery who came back to life, and took the chip lead when the final table was set by eliminating Cameron Tullis in tenth place A♦ A♥ > A♠ K♥.

The final table of WSOP #1 got underway shortly before 9.00pm, with thirty minutes remaining in Level 17 (blinds 5,000/10,000 – ante 1,000). Because of the relatively short stacks, there was no hanging about at the table and there were three all-in shoves in the first five hands.

The first two shoves went unanswered, but the third – by Kevin Chiem (K♦ J♣) after the flop of 4♣ J♦ 3♦ – was called by John Taylor (A♥ J♠). Taylor´s superior kicker won the hand, and Chiem was eliminated from the Casino Employees Event in ninth place.

Less than three orbits of the button later, and David Luttbeg was eliminated in eighth place after attempting to steal the blinds with 7♦ 5♦ and running into Corey Emery´s Q♦ Q♣; and Luttbeg was quickly joined on the rail by Martin Sobczak, who got it all in pre-flop with A♣ 8♣ and failed to improve past Olivier Doremus´ 9♣ 9♥.

Pocket Nines were again a factor when Charles Nguyen eliminated Brian Wong towards the end of Level 18 (9♦ 9♥ > 8♠ 8♥); and, after a level of action without an elimination, Nguyen struck again at the beginning of Level 20 – eliminating John Taylor in fifth place 7♦ 7♠ > 4♠ 2♥.

While Charles Nguyen had been heading in an upwards direction towards the top of the leaderboard, Corey Emery was heading in the opposite direction after doubling up Olivier Doremus A♥ J♣ > A♣ 6♠ and losing a substantial pot to Roland Reparejo´s paired K♥ 9♦.

With the average chip stack worth just twenty-five big blinds, there was a cautious passage of play throughout the next two levels. Deep into Level 21, Olivier Doremus had doubled-up at the expense of Roland Reparejo K♣ Q♦ > 10♥ 10♠, but it was not enough to save him from being the next player to bust as Level 22 began – running his A♦ Q♥ into Corey Emery´s pocket Kings and failing to find the Ace he needed to prevent his elimination in fourth place.

Emery was also responsible for the elimination of Charles Nguyen in third place – Nguyen moving all-in with 7♣ 6♣ after the flop of 7♠ K♥ K♦, and Emery having no hesitation in calling with K♣ Q♠ for trip Kings. Corey Emery had completed a quiet remarkable comeback from being practically out of the tournament during four-handed play to taking the chip lead into the heads-up, and – in the last hand of the night – he so nearly completed what would have been a sensational victory.

Reparejo: 6♠ 6♣ for rivered set of Sixes

Corey Emery had been one card away from winning the first WSOP bracelet of 2014, but now the two players will have to return tomorrow to battle out the conclusion to WSOP #1, and this time it is Roland Reparejo who will be favourite to win as he has a 1,795,000 -v- 735,000 chip advantage over his opponent.