The 2014 World Series of Poker got underway yesterday with the traditional Casino Employees Event and a cannon blasting $1 bills through the tournament arena. 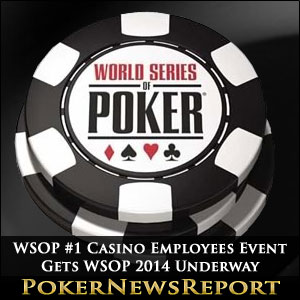 The 2014 World Series of Poker got underway yesterday with the traditional Casino Employees Event and a cannon blasting $1 bills through the tournament arena.

The Casino Employees WSOP Event #1 marks the start of 49 days of high-velocity, high-stakes and high-emotion poker, and gives the dealers, bloggers and other casino staff – including the WSOP´s Executive Director Ty Stewart – an opportunity to demonstrate the skills they have picked up from the pros.

The $500.00 buy-in tournament carries a lot of kudos for the winner, and subsequently 876 players filed into the Brasilia Room at the Rio All-Suites Hotel and Casino to create a prize pool of $394,200 which would be shared between the top 90 players.

The pace of the action during the early levels of WSOP #1 was electric, and half the field had been eliminated before the end of late registration at the close of Level 5. Hand-for-hand play started at the end of Level 9, and was nearly over immediately when David Luttbeg moved all-in with Q♥ J♠ against Mo Nuwarrah´s K♣ 10♣. Fortunately for Luttbeg, his hand improved to a Broadway straight and hand-for-hand continued.

The money bubble burst when Harrah´s dealer Mike Connors moved all-in with A♣ A♦ after the flop of Q♣ 10♣ J♦, and Jay Graunstadt made the call with K♥ 9♥ for a flopped straight. The King Connors needed to stay alive in the event failed to materialise, and the ninety remaining players were each assured of a $886 min-cash.

Soon after his elimination of Mike Connors, Jay Graunstadt (A♥ J♥) spiked a Jack on the River to bust a player with pocket Threes and move into a commanding chip advantage over the rest of the field. However, he was not to finish the day as chip leader due to Corey Emery turning a gutshot straight in the last hand of the night to eliminate a player with pocket Jacks.

When play resumes tomorrow, the survivors from Day 1 of WSOP #1 will be heading into Level 12 (blinds 1,000/2,000 – ante 200). A substantial number of players have fewer than twenty big blinds to play with, so the action should once again be fast and furious. Those who might be able to take a more relaxed attitude during the early proceedings include: