A Wall Street Journal online poll, asking the question ‘Should Washington Allow Online Gambling’, produced a massive ‘yes’ vote in support of a change of law. 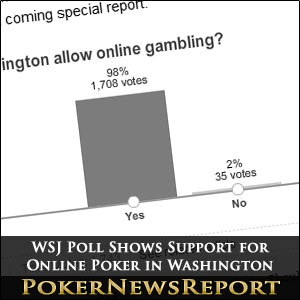 A Wall Street Journal online poll, asking the question Should Washington Allow Online Gambling, has produced a massive yes vote in support of a change of law.

The poll, accessible at http://blogs.wsj.com/digits/2013/04/30/vote-online-gambling/, was featured in the Wall Street Journal to coincide with the launch of the first ‘regulated’ online poker site in Nevada on Tuesday and attracted the attention of online poker players in the States through the popular 2+2 forum.

Among the comments added to the WSJ poll was one added by the Poker Players Alliance Vice President of Player Relations – Rich Muny. He stated:-

The biggest tax hit on me — a 100% tax! — was delivered by Congressmen who wished to use big government to stop me from playing poker in my own home with my own money. Rather than wasting tax dollars on enforcement efforts designed to control what people do in their own homes, let’s instead license online poker.

The unclear, ambiguous Unlawful Internet Gambling Enforcement Act of 2006 forces banks to police the Internet to stop something the act does not even define — unlawful Internet gambling. Unsurprisingly, banks, the Chamber of Commerce, Americans for Tax Reform, the one million member Poker Players Alliance, and many others have spoken out against the negative effects of this law.

How undefined is online gaming? In late 2011, the DoJ said the Wire Act does not apply to poker and last year, the federal district court in New York ruled that poker is not gambling as defined by the Illegal Gambling Businesses Act.

Millions of Americans have organized to stand up to this big government action against our liberty. Poker is an honorable game that we are proud to play. I know I don’t need big government nanny-staters to use force of government to compel me to behave in a manner they believe is best for me. As Rep. Barton (R-TX), sponsor of last year’s HR 2366, the Online Poker Act, says, if you don’t want to play poker online for money, you don’t have to!

Inasmuch as the online poll may have been hi-jacked by those in favour of online poker in Washington, it still does not hurt to add your name to the growing list of supporters. Visit http://blogs.wsj.com/digits/2013/04/30/vote-online-gambling/ to register your vote and add a comment in support of a change in the law.