Marvin Rettenmaier made a fantastic start to his time as a Team PartyPoker Pro by winning the WPT World Championship at The Bellagio in Las Vegas. 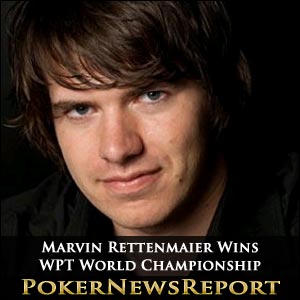 Marvin Rettenmaier made a fantastic start to his time as a Team PartyPoker Pro by winning the $25,000 buy-in No-Limit Hold’em World Poker Tour (WPT) World Championship at The Bellagio in Las Vegas.

The German picked up $1,196,858 for his victory – as well as a stunning WPT Champions trophy, a silver Tiffany card protector and a WPT World Championship seat for next season so he has the opportunity to defend his title – after defeating Philippe Ktorza in their marathon heads-up clash that left the Frenchman with $805,310 as runner-up.

PartyPoker will certainly be thrilled by his success as the 25-year-old only joined their pro team last week, making this victory especially important to the German, who was also recording his first ever seven-figure triumph. Not too shabby.

It does appear that Friday’s break – to allow the $100,000 buy-in Super High Roller to be completed and won by American Tom Marchese – agreed with the six players who made the final table, but especially chip leader Rettenmaier as it took more than eight hours and nearly 200 hands for the youngster to emerge victorious.

Stuttgart’s Rettenmaier – who eliminated Michael ‘The Grinder’ Mizrachi in third place for $424,618 to extinguish the American’s goal of a third WPT crown – started his heads-up war of attrition with Ktorza on 8,550,000 chips to his opponent’s 6,675,000, but was forced to show great determination to ultimately overcome the 48-year-old Frenchman.

It took just four hands of head-to-head play for Parisian Ktorza to overtake Rettenmaier, though, before he then opened up an even bigger gap 10 hands later from a pot that garnered the Frenchman more than four million chips.

The 160th hand saw Rettenmaier double-up again after they duo got all the chips in on an 8♥ 7♠ 3♣ flop. Rettenmaier showed 8♦ 3♦ for two pair and Ktorza revealed Q♥ 7♦ for middle pair. The German’s hand stayed in front after the 9♠ turn and 2♠ river, leaving many railbirds – as well as Rettenmaier – to believe that he had actually secured the title.

However, an official chips count showed that Ktorza had 825,000 remaining, although, at just 3.3 big blinds, it looked as though the end was nigh. How wrong we all were…

Philippe Ktorza On a Roll

That left Rettenmaier with just over nine big blinds – and now it appeared Ktorza was on the brink of glory. Again, we were all wrong as the German refused to buckle under the pressure.

The final hand arrived just minutes later – and it was something of a nightmare for Ktorza.

On the button, Rettenmaier raised to 800,000 and Ktorza shoved all-in for 6,775,000. The London-based German quickly made the call to reveal K♠ K♣, much to the disappointment of Ktorza, who must have thought he was poised to double-up with his J♦ J♥ hole cards.

As was expected, Ktorza received no help on a board of A♠ 9♦ 3♣ 10♣ A♥ to ensure that Rettenmaier, with aces and kings, continued his wonderful start to this year, which has seen him earn $1,522,950 from live tournaments.

The seventh and last day of the event began with Hollywood’s Mizrachi and one-time WPT winner Nick Schulman, of Manhattan, aiming to add another WPT trophy to their respective collections.

This ensured there would be drama throughout the day, with the 29th hand seeing Florida’s Trevor Pope hit the rail in sixth place for $155,571 after being eliminated by Ktorza.

Ktorza tabled the J♥ J♠ to face-off with the A♣ 3♦ of Pope. Pope needed to improve to stay alive, but the Q♦ 5♣ 2♣ J♣ 8♥ was no good to him as the Frenchman gained trip jacks for the knockout.

Twenty-eight hands further on and there was a momentous pot that saw Mizrachi double-up through Rettenmaier and eliminate Vegas pro Steve O’Dwyer in fifth place for $192,176.

Rettenmaier showed A♦ K♦, Mizrachi tabled 10♥ 10♠ and O’Dwyer revealed A♠ K♥. The board ran out J♦ 9♣ 3♥ 4♠ 2♦ to ensure that Mizrachi’s tens stayed ahead to eliminate O’Dwyer and double-up through Rettenmaier to move into the chip lead on 5.2 million – just ahead of the German (4.85 million).

The aggressive Rettenmaier, however, kept chipping away at his three opponents to hold a huge chip advantage before the next elimination arrived 52 hands later, when he sent Schulman to the rail in fourth place for $256,235.

No Easy Path to Victory

As mentioned earlier, it appeared as though Rettenmaier would finish off his two opponents in double-quick time. And, as stated, we were very wide of the mark on that belief.

Ktorza doubled-up through Rettenmaier four hands later, but the German remained aggressive in his play – most likely because he knew his big stack was perfect to play that way as the cash increases covering the last three places were enormous.

The Frenchman doubled-up through Rettenmaier two hands later to draw level with the chip leader – this time when the German moved all-in with 5♣ 5♠ over Ktorza’s initial raise. But Ktorza made the call to show 8♣ 8♠, which held on a board of K♠ 9♠ 7♣ K♣ 3♣.

Mizrachi was the short stack and shoved all-in for approximately 1.6 million chips on the very next hand with 3♥ 3♠, to be called by Rettenmaier, who showed A♦ 10♥. The A♠ Q♠ 10♠ 10♦ A♥ board could not have been much better for Rettenmaier as he picked up a full house to eliminate Mizrachi in third and end his dream of a third WPT title.

Then came the incredible heads-up battle between Rettenmaier and Ktorza that only came to a conclusion after 78 more hands.

So, that’s it for Season 10 of the WPT. Now it’s time for the 43rd World Series of Poker (WSOP), so expect the action to be fast and furious over the next couple of months. PokerNewsReport will, of course, keep you updated on all the big events.