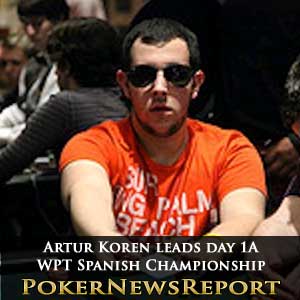 There might have been a few players missing from the opening day of the World Poker Tour’s Spanish Championship – mainly due to the ash cloud hovering over Europe from the latest eruption of Iceland’s most active volcano, Grimsvotn, as well as the fact the World Series of Poker (WSOP) kicks off next Tuesday – but it was an exciting first day just the same.

A rather small field of just 94 poker players stumped up the €3,200 plus €300 to enter Day 1A’s main event no-limit hold’em freezeout at the Gran Casino in Catalonia capital city Barcelona – and that was whittled down to 54 by close of play of the first event on the WPT’s 10th season.

Artur Koren leads the way on 122,800 chips – which is over twice the average chip stack – after moving ahead early, while also in six figures are Michele Danielo, Julien Mariana and Justin Tazelaar.

There was also a handful of big-name professionals in attendance for the opening day, with home town favourite Leo Margets making Day 2, as did Finnish star Juha Helppi – who recently joined RAY Poker – and Belgium’s Kevin Vandermissen, who claimed second place and €260,000 at the European Poker Tour (EPT) Snowfest in Salzburg, Austria, back in March.

It is expected that there will be a bigger entry list for today’s Day 1B in Barcelona as pros and amateurs alike chase the expected €250,000-plus top prize from the four-day tournament which ends on Sunday.

Season IX of the WPT may have only ended last week, when Scott Seiver picked up $1,618,344 for winning the WPT World Championship at The Bellagio in Las Vegas, but poker fans can satisfy their need for action by watching a live stream of the Barcelona tournament via the PartyPoker Blog, which will feature the all-important hole cards and commentary.

Controversial German Ali Tekintamgac – who is at the centre of a cheating scandal – picked up the title and €315,000 from last year’s Barcelona event when he outlasted 325 other players.

The Merit Crystal Cove Hotel and Casino complex hosts the seven-day event, which runs from June 13-19.

The festival will feature a wide variety of events that should suit all players – no matter the level of their bankroll – with the main event, being held over the final two days, guaranteeing a prize pool of at least $300,000.

There is a $2,500 plus $200 buy-in with the top placed player looking set to leave with a six-figure sum, while $100 satellite tournaments will be held during the week leading up to the main event.