The bad Vince Van Patten metaphors and big paydays will continue and the WPT signs a new TV deal and announces a new schedule. Season XII kicks off August 16. 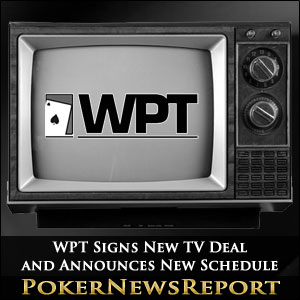 The bad Vince Van Patten metaphors and big paydays will continue and the WPT signs a new TV deal and announces a new schedule. Season XII kicks off August 16.

The WPT and Fox Sports Network (FSN) announced that a new deal has been reached that calls for FSN to distribute the WPT through 2017. , David Sussin FSN Vice President of Programming said, World Poker Tour has delivered record viewers over the past two seasons, and that is a testament to the consistent quality of the show and WPT’s position as the world’s premiere provider of poker programming. The new deal calls for about 100 hours of poker programming to be aired on FSN over the course of the agreement.

The first stop on Season XII will be in Cyprus on August 16. The first of 11 stops on the WPT Main Tour will mark the beginning of the Player of the Year race. The $4,400 buy in event will not be televised but will be streamed at WPT.com.

The First televised event of Season XII kicks off at the Bicycle Casino in Los Angeles for the $3700 Legends of Poker Event on August 29.

Matt Savage will continue as the WPT Executive Tour Director working with the casino partners and participants to ensure a smooth professional experience.

During the 2013 part of Season XII the WPT will host events in North America, Europe, Africa, Asia, and the Caribbean. The 2013 Main Tour schedule includes a non-televised event in South Korea beginning December 16. The tournament will be held at the new WPT Club Phoenix Poker Room at the Ramada Plaza Hotel in Jeju, South Korea.