This year´s $2 million guaranteed WPT500 @ ARIA will have a staggered series of ten Day Ones and a separate day allocated for the Final Table. 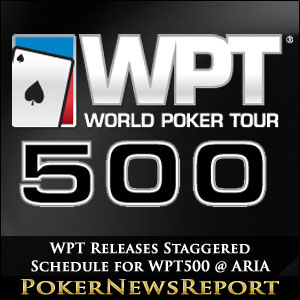 This year´s $2 million guaranteed WPT500 @ ARIA will have a staggered series of ten Day Ones and a separate day allocated for the Final Table.

Following the sensational success of last year´s inaugural WPT500 @ ARIA – in which Sean Yu defeated 3,598 opponents to take the $260,000 first prize – significant changes have been made to this year´s event to allow more players to enter and to have a separate day for the Final Table.

In addition to the number of starting flights being increased from six to ten, the dates on which the Day Ones will be played have been staggered over three weekends to maximise the number of players likely to enter the tournament.

Needing to hit 4,000 entries to meet the guarantee, an aggressive live and online qualification schedule is being prepared. Players at the ARIA cardroom will be faced with a daunting choice of qualification routes into the target event, while there will be no escape from the volume of online satellites soon to appear on partypoker.com.

An extensive online qualifying schedule is also being prepared for players from New Jersey, and players from Belgium, Denmark, France and Spain will also be able to take advantage of online qualifiers on PartyPoker´s and Bwin´s regional sites. ClubWPT is also getting involved and aims to award forty of its members packages into the WPT500 @ ARIA

The Major Changes to the WPT500 @ ARIA

Whereas last year´s event was compressed into six opening flights – the last of which starting at 8:30am on the same day as the tournament concluded – there will be ten Day Ones in this year´s WPT500 @ ARIA distributed around the first two weekends of June and the first weekend of July.

Players in the top 5% of each Day One entry will automatically be in the money and carry their chip stacks forward to Day 2. Day 2 will end when just nine players remain – who will carry forward their chip stacks to the Final Table on Monday July 6.

The Independence Weekend is going to be mighty busy in Las Vegas, with three major events competing for players. In addition to the climax of the WPT500 @ ARIA, the World Series of Poker will be in the middle of two bracelet events and has a special “Satellite Day” scheduled for July 4th – in which players can win “cheap seats” into the WSOP Main Event (which starts on Sunday July 5th).

There is also be a “$25 Million Super High Roller Bowl” scheduled for July 2-4 at the ARIA which claims to already have fifty-six players willing to pony up the $500,000 buy-in in pursuit of an estimated $8 million first prize. Among those “scheduled” to compete in the event are Phil Ivey, Phil Hellmuth, Tom Dwan and Sam Trickett, so irrespective of what happens at the WPT500 or at the Rio, this could be the event to watch.

The organisers of the “Super High Roller Bowl” are promoting their event by hosting a free draw (for eligible residents of the US) which will see five lucky winners and their partners flown into Las Vegas, accommodated at the ARIA Resort and given front row seats for the Final Table of the event. The winners of the free-to-enter competition will also get $5,000 in spending cash.

To enter the free draw, visit www.superhighroller.com/contest and complete your details using the online form. We strongly recommend that you read the terms and conditions of the contest to avoid disappointment (or additional charges during your stay) and please note that it is probable that you will interviewed by the TV company broadcasting the Final Table of the event – so pack your best shirt!