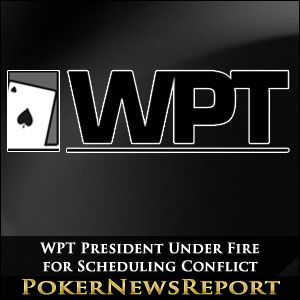 Today’s top poker pros expect to be able to play in every major event, which is why the community was in an uproar over WPT President Adam Pliska’s decision to run the WPT Season XII Championship from April 22-26,2014, just four days before the start of the already scheduled PokerStars.com EPT Monte Carlo Grand Final.

The EPT Monte Carlo will begin on April 23rd, with the Grand Final slated to start on the 26th, effectively eliminating anyone from making a deep run in the WPT Championship from participating. Normally, this wouldn’t be a huge deal, but the Monte Carlo and the WPT Championship are arguably two of the five most prestigious tournaments of the year. In other words, most pros would at least liked to have the option to participate in both.

Several players voiced their opinions over the matter including Todd Terry who tweeted, The primary objective for WPT scheduling should be avoiding conflicts with PokerStars EPT events but there are 3 conflicts next year. Scott Seiver also spoke against the decision, pleading with Pliska to reconsider his decision.

WPT representatives claim that they have been working with EPT officials about the scheduling conflicts, and are doing their best to allow players to participate in both events. Pliska half-heartedly addressed the matter on Tuesday, citing that there is only the slightest overlap and that players can play both events – the only exception being those that make the final table of the WPT.

But should players who make a deep run in the WPT Championship be excluded? If anything, they’ll want to ride their momentum into the next major tournament. Now they will not have the opportunity to do so.

Day 1b of the Grand Final begins on the 27th, one day after the conclusion of the WPT Championship. Factor in the time zone difference and time spent flying and it’s reasonable to assume that any WPT finalist would be forced to register at the beginning of Day 2, if that.

Borgata Poker Tournament Director Tab Duchateau claimed that the Borgata, host of this year’s PartyPoker sponsored WPT Championship, did what it could to avoid overlapping with another major tournament. Pliska claimed the scheduling conflict was unavoidable and that he will continue working with other tours for the benefit of the poker community.

Strong words, but is Pliska and Duchateau’s words sincere, or was the conflict avoidable? It looks like we’ll never know for sure. Either way, poker pros are advised to book their flights in advance, and be ready to cancel them should they final table the WPT Championship next spring.